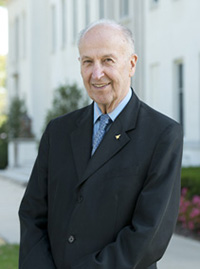 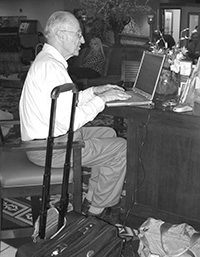 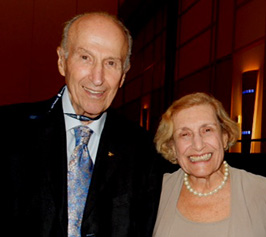 Robert (Bob) L. Brent passed away 24 February 2021. As a physician, Bob's profession was not the usual for a member of the Health Physics Society (HPS), but he was highly relied upon and duly recognized for his expertise on the effects of radiation on the human embryo and fetus.

Bob was a recipient of both our HPS 2000 Robley D. Evans Commemorative Medal and our HPS 2014 Distinguished Public Service Award. Citations written to honor his receipt of these awards outline his outstanding scientific accomplishments. From the University of Rochester, he received his MD in 1953 and, two years later, his PhD in radiation biology and embryology. He began his research into fetal radiation effects while working on the Manhattan Project and became world-renowned for his work in that area. He published hundreds of papers on the subject in journals, he contributed to numerous National Council on Radiation Protection and Measurements (NCRP) commentaries and reports, and he authored several books. During his illustrious career, he maintained a focus on research, always believing there was more to be learned.

The article in Health Physics about his receipt of the 2000 Robley D. Evans Commemorative Medal states:

His research on the effects of radiation on the embryo demonstrated the no-effect dose for most congenital malformations, established that radiation effects on the embryo were due to the direct effects of the radiation, and demonstrated some of the characteristics of the "all-or-none period" of embryonic development. These studies contributed to the modifications of the "10-day rule" (NCRP Handbook 54). Besides studying the effects of ionizing radiation, he has been involved in microwave and ultrasound research. He was the first to calculate the reproductive risk of 14C (1954), to propose the use of rose bengal to diagnose biliary atresia (1960), to produce potent teratogenic antibodies (1961), to describe the technique of uterine vascular clamping (1960), and to lead the way for many other developmental biology advances. (Roessler 2000).

Bob trained at Massachusetts General Hospital and then worked at Walter Reed Army Institute of Research for two years. For 30 years, he worked at Alfred I. DuPont Hospital for Children, where he was chair of pediatrics. He was elected to the NCRP in 1973, serving until 1997. He also served as editor in chief of the journal Teratology for 17 years.

A deep passion drove Bob and, although his work was strongly based in science, it was his empathy and compassion that always pushed him. His drive to learn more was motivated by his passion to put radiation fears to rest in the minds of pregnant women and concerned fathers. By 2013, he estimated his consults on the subject to number more than 25,000 (Walchuk 2013). In the early 2000s, it was as if two worlds collided. Here was an expert on fetal radiation effects and the HPS had the newly developed Ask the Experts (ATE) feature. ATE was exactly what Bob needed to get his expertise out to the public and Bob was exactly who Gen Roessler (HPS website editor in chief at the time) needed to answer the numerous questions coming to ATE from women wondering if they should follow the advice of their physician and terminate a pregnancy after a medical exam involving radiation. This is what drove Bob; his entire career led to this. As shared in an interview from 2015, Bob always wanted to be a physician to help people regardless of pay (Bauers 2015). With ATE, Bob would help thousands and save hundreds of babies' lives.

Bob estimated he had over 3,000 personal contacts with questioners on ATE (Classic and Roessler 2014). Many lasted for several days, even weeks, so he could fully understand the situation and be able to answer appropriately. Bob's answers were direct—some may even say blunt. No sugar coating, no statistics, no infinitesimal risk numbers. Just fact. And the questioners loved him. They were finally getting exactly what they wanted—a straight answer to their question(s) from an expert who cared. In their appreciation, they would often send Bob a picture of their baby along with a huge thank you. This, then, completed the cycle. All the years of study and work, all the endless days of research—his career culminated in the receipt of thousands of thank you notes and pictures of healthy babies whose lives he saved.

Bob was preceded in death by Lillian, his wife of 71 years, whom he had known since they met at a summer camp when they were eight years old. Bob and Lillian had three sons and a daughter. As outlined in the HPS Robley Evans citation, "Two of their sons are physicians and their daughter has a master's degree in nursing." The Brents' son who "was a classic jazz pianist died of sudden cardiac arrest at the age of 25 while playing basketball." (Roessler 2000). The Brents had 11 grandchildren and 16 great grandchildren.

The Society cannot begin to thank Bob for his years of service and dedication investigating fetal radiation effects and for his years of work as the Pregnancy and Radiation ATE expert. He was a wonderful person, an excellent scientist, a caring physician, and an exceptional communicator.