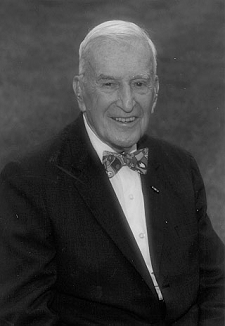 In June 2002, in honor of Dr. Taylor's 100th birthday, special issues of the journal Health Physics and the HPS Newsletter were dedicated to Past President Taylor.

The June 2002 Health Physics cover featured an oil painting of Taylor by HPS Fellow Kenneth L. Miller. The issue included editorials of appreciation for Taylor's pioneer work in the field of radiation protection and reprints of several of Taylor's significant publications. A listing of all of Taylor's Health Physics publications was also provided.

The June 2002 Newsletter cover story presented highlights of Taylor's life, letters from his friends and colleagues honoring him on his 100th birthday, and historic photos of his life.

On the occasion of Taylor's 100th birthday, Senator Pete V. Domenici rose in the United States Senate to pay tribute to a "truly great American," an honor duly recorded in the 5 June 2002 Congressional Record.

Taylor (or Laurie as he was called by his friends and colleagues) was born in Brooklyn, but his family moved to Maplewood, New Jersey, soon after his birth. Taylor's attraction to science began in early childhood since his father was a metallurgist who had a broad interest in physics, chemistry, engineering, mining, geology, and botany. Both parents encouraged his reading and hard study from his earliest years. It was particularly exciting for Taylor as a grade school student to visit Thomas Edison in his laboratory. When the young Taylor expressed an interest in vacuum tubes, Edison promptly gave him a cold-cathode x-ray tube. Taylor's father forbade his son from experimenting with the x-ray tube for his dad had already heard about the dangers of x-ray exposure.

While a young boy, Taylor explored wireless telegraphy and later became a licensed amateur radio operator. His first love, however, was plumbing. He often walked the 3½ miles to school to save the nickel carfare to buy plumbing tools. He studied his father's college physics text to learn about electronics. As a junior in high school during World War I, Taylor proposed a method to help troops penetrate barbed-wire entanglements using 75mm shells. The War Department's rejection of the idea as not feasible did not deter Taylor's later endeavors to serve his country in military oversight operations during World War II.

Taylor attended Stevens Institute for a year to study engineering but had to drop out to earn money for tuition. He worked for a year at the Bell Laboratories, where his interest in electronics led to his decision to drop engineering at Stevens and to enroll in physics at Cornell University. There he completed the requirements for a doctorate except for the residency rules. His last year of research was in x-ray crystal structure, electronics, and x-ray absorption spectra. One of his professors directed him to what was supposed to be a one-year position in x-ray work relating to radiology at the National Bureau of Standards (NBS) in Washington, DC. After studying much of the radiology literature, Taylor spent a week or so at Memorial Center in New York City with Dr. Gioacchino Failla, who persuaded Taylor of the great need for radiological physicists. There were only a few in the entire country at that time. Thus began Taylor's first career, 28 years in radiation dosimetry and radiation protection at the NBS, now known as the National Institute of Standards and Technology (NIST). Taylor became head of the x-ray group in the atomic physics section and led a team to organize an x-ray standards program. In 1941 he was made chief of a new x-ray section and, in 1951, chief of the atomic and radiation physics division.

In 1928 Taylor was named as one of the two U.S. members of the predecessor of the International Commission on Radiation Units and Measurements (ICRU), which had been constituted three years earlier. Also in 1928, he was one of a small group that organized the forerunner of the International Commission on Radiological Protection (ICRP) and was named the official representative of the NBS to that body. Thus, he was a member of both commissions by the time he reached the tender age of 26! The next year the National Council on Radiation Protection and Measurements (NCRP), originally called the U.S. Advisory Committee on X Ray and Radium Protection, was formed. Taylor was its first chairman.

Taylor continued to be responsible for x-ray standards at the NBS until 1943. Most of his papers in this period dealt with x-ray measurements and early radiation protection recommendations. The "roentgen" had become the official unit of x-ray exposure in 1928 and established a firm base for x-ray measurements for the first time. Nevertheless, there were many problems remaining, especially in the measurement of gamma rays from radium then in wide use in radiotherapy. Consequently, it was a period of great activity in the measurement field and these problems were further compounded as super-voltage radiations entered the scene later in the decade of the 1930s. By the mid-1930s, the NCRP had already developed the radiation protection standards that were in place for use by the Atomic Energy Project when it was born in 1943.

In 1940, with war clouds on the horizon, Taylor was asked by the National Defense Research Committee (NDRC) and the NBS director to organize another totally new program for the development of the Proximity Fuse for the defense of Britain against the German bomb attacks. He was put in charge of all field-test and proof operations and he became assistant director of the greatly expanded program. For this work he received the Gold Medal of the Department of Commerce.

In the spring of 1943, the United States Army Air Force sought Taylor's services to organize a program of Operations Research for the Army Eighth Air Force Fighter Command in England. When Taylor returned to the United States in late 1943 to recruit additional professional personnel, the 9th Tactical Air Force was just being organized. By the time of the Normandy invasion, Taylor had put together Operations Research Programs for the Army Ninth Air Force, its Bomber Command, and three Tactical Air Commands, and he served as scientific advisor to Lieutenant General Hoyt Vandenberg. For these services, he received two Presidential Citations, the Medal of Freedom, and the Bronze Star (Presidential), then the highest military award that could be given to a civilian. In 1946 Taylor returned to his real love, radiation dosimetry, at NBS as the chief of the x-ray section.

Taylor took leave from NBS for a year in 1948–1949 to organize and serve as chief of the Biophysics Branch in the Division of Biology and Medicine of the Atomic Energy Division. It was during this period that he organized "Project Gabriel" to evaluate the long-range implications of strontium-90 in fallout. In 1962 Taylor became associate director of NBS, where he remained until his retirement in 1965.

His career, however, was by no means over. He began a new one at the National Academy of Sciences (NAS), where he spent six years as special assistant to the president of the Academy and as executive director of the Academy's Advisory Committee on Emergency Planning.

Taylor departed from NAS in 1971 at the mandatory retirement age of 70. Then he devoted essentially all of his energies to the NCRP, whose structure he had reorganized in 1964, into the now federally chartered NCRP by an act of the Congress of the United States. With the support of the Joint Congressional Committee on Atomic Energy, Taylor accomplished these important changes in status for the NCRP. Taylor was elected the first president of the new Council, a position he held until his retirement in 1977.

After his third retirement, Taylor continued to work in his beloved field of radiation protection for another 21 years, volunteering his time to the NCRP, writing books, and serving as an expert witness for the Department of Justice. Over the years he testified before many congressional committees on issues concerning radiation exposure and protection standards.

In an interview in 1995, Taylor related how, in 1929, he was accidentally exposed to a large amount of whole-body radiation from an x-ray machine at NBS. That exposure in addition to medical radiation treatment for bursitis and other benign conditions and from radiation experiments resulted in an estimated whole-body dose-equivalent in excess of a thousand rem. He experienced no discernible adverse effect. He related that experience to juries with great effectiveness while testifying in cases of alleged radiation injury involving small radiation exposures.

Taylor's career was one of extraordinary diversity. He wrote or contributed to some 24 books and published well over 160 scientific papers, most of the first half of these arising out of his laboratory research on radiation dosimetry, an area in which he commanded the respect of all of his colleagues and peers. Undoubtedly his most important legacy to historians (besides hundreds of boxes of records and artifacts donated to the Countway Library at Harvard University) is a mammoth tome of 2,000 pages titled Organization for Radiation Protection, The Operations of the ICRP and NCRP, 1928–1974 (DOE/TIC-10124). Also of great historical interest is his 386-page document, X-Ray Measurements and Protection, 1913–1964 (NBS Special Publication 625). He left another valuable legacy in video format. Under the sponsorship of the former Bureau of Radiological Health, he conducted interviews from 1977 to 1979 of 27 pioneers in medical radiological science. One interview was of Taylor himself. Transcripts were published in 1984 under the title Vignettes of Early Radiation Workers by the Center for Devices and Radiological Health, U.S. Public Health Service. More recently (1994 and 1995), two videotaped interviews of Taylor also were conducted by the American Association of Physicists in Medicine.

Taylor also was a superb administrator and diplomat who was most effective in getting scientists from many disciplines to freely volunteer their time and effort in the production of valuable scientific reports for the benefit of practitioners in all fields of radiation usage as well as for the general public. His success at this was the foundation of no less than 56 reports published by the NCRP under his tutelage.

Taylor was involved in no fewer than 75 committees of 37 different organizations of amazing diversity, including the American Medical Association, the Atomic Energy Commission, the Civil Service Commission, and the International Labor Organization, as well as scientific peer-review committees at various institutions including Argonne National Laboratory, where he served an unprecedented three times. He belonged to 16 scientific societies and served as president of two.

In 1934 Taylor played an essential role in initiating the "registration of qualified x-ray physicists" by the Standardization Committee of the Radiological Society of North America. This initial program to certify radiological physicists qualified to calibrate medical x-ray machines was taken over (in a controversial manner) by the American Board of Radiology (ABR) in 1947. Taylor was certified by both the ABR and the American Board of Health Physics (ABHP). He served on the ABHP (1959–1962) and was an examiner for both boards.

In his rich and varied career, nothing was more constant than Taylor's devotion to the NCRP and his steady development of its objectives; on the international scene, to the ICRP, on which he served as secretary from 1937 until 1950, continued as a member until 1969, and was an emeritus member to his death; and to the ICRU, on which he served as secretary from 1934 to 1950, chairman from 1953 to 1969, and honorary chairman and member emeritus, again to his death. In the field of radiation protection, he was the "man for all seasons" and second to none. His legacy will live for generations to come.

In addition to his many professional achievements, Taylor was also a licensed plumber, electrician, and carpenter and a master at woodwork. These skills he put to good use throughout his life. He enjoyed hiking and camping along the Appalachian Trail with his sons. On one such trip they became snowbound for a week.