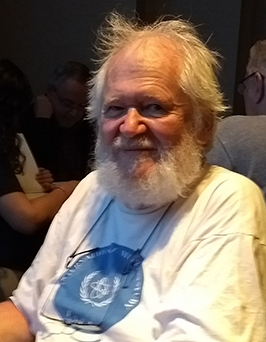 In the heart, that to live on, who loved us, means not to die.

Franz (Shoenhofer) Schönhofer was born in, raised in, and a lifelong resident of Vienna, Austria. Born 15 September 1944, he died 11 April 2021.

Franz graduated with a doctorate in analytical and radiochemistry from the University of Vienna, Austria. After graduation, he started his career as an assistant professor at the "Atominstitut" with radiochemistry. He later joined the Federal Ministry of Health and Environmental Protection, where he established a modern laboratory network for environmental monitoring of radioactivity in Austria. After the Chernobyl accident, he worked with the analysis of tens of thousands of samples, helped to mitigate the consequences of the accident, and served as scientific adviser for the Austrian Government, the World Health Organization, and the International Institute for Applied System Analysis. He then joined the Austrian Federal Institute for Food Control and Research, where he was head of the Department of Radioactivity in Food and Radiochemistry. While there, he not only engaged in food surveillance, but also with natural radioactivity like radon and radium in drinking water, in the Austrian Radon-in-Indoor-Air Project, carbon-14 dating of alcohols, and in radioecology. During his tenure at the Department of Radioactivity in Food and Radiochemistry, he also took time to mentor international student interns at his laboratory. He served as head of the terrestrial working group in the International Mururoa Project, and he worked with the Preparatory Commission of the Comprehensive Test Ban Treaty Organization as an expert with the International Atomic Energy Agency. He taught on both the national and international level helping to exchange scientific knowledge.

Franz's "secret love" was liquid scintillation spectrometry, though he worked with natural radioactivity and legislation at the Austrian Federal Ministry of Agriculture, Forestry, Environment, and Water Management, Radiation Protection Department. In this field, he developed many methods for ultra-low-level radiation detection applications. He organized the International Conference on Advances in Liquid Scintillation Spectrometry, held in Vienna 14–18 September 1992, and he participated as associated editor of several other international liquid scintillation conferences. He published more than 100 scientific papers, the majority dealing with application of liquid scintillation spectrometry including radon detection and carbon-14 detection in wines and vinegars, but also in such diverse fields as the Chernobyl accident, radioecology, radon and radium, the Mururoa Study, and tritium uptake from wristwatches, among others.

In "retirement" Franz continued to travel and participate in international conferences either at the request of organizers or on his own to further his knowledge. He served as a technical reviewer for technical journals, including Health Physics. He remained involved in activities with the Austrian Standards Institute and the Polish Central Mining Institute and consulted in Spain on the measurement of radioactivity in waste piles. In 2017, he attended the annual Health Physics Society meeting in Raleigh, North Carolina, as both the G. William Morgan Lectureship Awardee and the Environmental/Radon Section International Guest Lecturer on Contemporary Topics in Radon.

His zeal for life resulted in his many adventures around the world and his inquiry to his surroundings. He could always be counted on to know where to find a good beer and check out the local activities of interest and how to have a good conversation with those he encountered. Franz is survived by his three children, Christian (and Maria) Schoenhofer-Holler, Roland Schoenhofer, and Karin Schoenhofer, and by several grandchildren.