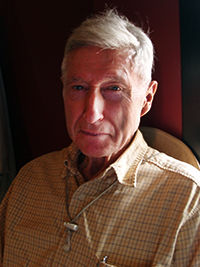 The "Last of the Mohicans" is gone! Francis Joseph Bradley passed peacefully in his sleep at home on 29 May 2021. He was the sole remaining original founder of the Health Physics Society (HPS). It was Frank who germinated the need for a forum where early health physicists could gather to exchange information about the burgeoning discipline taking shape post-WWII. He was the last man standing from his US Army Air Corps B-29 crew. He was the patriarch of the Bradley family—the last of his generation.

Frank was born and raised in Corona Queens, New York, to Irish immigrant parents. On 4-4-44, after graduating from Bishop Laughlin Memorial High School, he was inducted into the Army and wound up stationed on Guam. He flew 25 bombing missions over Japan as tail gunner. He returned and earned a BS degree in electrical engineering at Manhattan College. In 1949, Frank sat for a US Atomic Energy Commission (AEC) Fellowship exam to enter the Radiological Physics program at Oak Ridge National Laboratory. It was there he first met Herman Cember, who became his classmate and lifelong friend. They were both students in the second class of Elda Anderson at Oak Ridge, which graduated an illustrious class of newly minted health physicists, including Allen Brodsky, Les Rogers, Doc Emerson, Myron Fair, and John Byrom. He kept his classmates as lifelong friends who gathered in their respective home states for annual reunions over the years. The 50th year reunion was convened at the Failla Award lecture and dinner for Mike Ryan in New York City in 2011. Frank was the lone surviving health physicist from Elda Anderson's Oak Ridge class of 1949–1950.

In April of 1951, Frank married his hometown girl, Bonnie Klei, and they set off on their journey. As a fledgling professional in a growing field, Frank went to work for Westinghouse in Pittsburgh, where he developed the company-wide radiation safety program. Concurrently, he earned a master's degree from the University of Pittsburgh. He went on to the position of radiation safety officer at Ohio State University, where he established the university's health physics program for all academic and medical institutions on campus. His duties included teaching, setting up a cobalt-60 irradiation facility, setting up a shielding and ventilation system for radioisotopes labs and the radiotherapy department at the university hospital, personnel dose monitoring, and waste management, plus myriad other responsibilities. While working at Ohio State, Frank earned his doctorate in physics and chemistry.

If all that were not enough, he and Bonnie raised his five children during this time. It was at the Bradley homestead in Ohio in 1955 that the HPS was spearheaded with Elda Anderson, K.Z. Morgan, Walter Snyder, and Jim Hart. Gears turned and the first HPS meeting, Ohio State University Health Physics Conference, was launched in cooperation with the AEC. Frank served on the technical program, which included Doc Emerson, Myron Fair, and the other Elda Anderson students. His personal definition at the 1955 Conference was "Health Physics is 'that' which allows one to walk through a lab or plant (or countryside) where ionizing radiation is being used or made with a relatively clear conscience that one is not being bombarded with radiation to an injurious extent." He was elected to the first HPS Board of Directors. It was fitting that Frank was honored with the HPS Founders award in 1988, his citation read by Herman Cember.

Frank was hired in 1961 by the International Atomic Energy Agency to carry out a United Nations (UN) Atoms for Peace mission in Turkey. He developed a code of regulations for the Turkish Atomic Energy Agency and an operational health physics program for a research reactor. He had teaching responsibilities and, like Frank as always, he kept his physics students as lifelong friends and colleagues. He accomplished a similar mission for a reactor in Taiwan, and again kept his friends throughout his career. His final UN mission was1994 in Albania, where he was sent to evaluate the national radiation safety program.

After Turkey and Taiwan, Bradley returned to the States to accept a three-year teaching position at the University of Pittsburgh Graduate School for Public Health. The appointment included the post of radiation safety officer with all that it entails. He then returned to industry for a stint at Isotopes, Inc., which sent him to Amchitka in the Aleutian Islands to collect environmental measurements from an underground nuclear detonation. He said he got to drive the tundra-mobile because he was one of few who could operate a stick shift.

Frank landed his longest-held position in the mid-1960s at the New York State Department of Labor (NYS DOL) as principal radiophysicist. He administered the program of regulatory enforcement for industrial use of radioactive materials and x-ray devices. He also codified regulations for safe use of lasers in industry and art. Throughout his several decades with NYS, he continued to write technical articles for the Health Physics Journal and was very active in the HPS. He was a charter member of the Conference of Radiation Control Directors in 1968. He retired from NYS DOL in 1992, but kept engaged by teaching laser safety classes and attending HPS annual meetings.

The list of scientific papers authored by Frank is lengthy. Beyond science, he had great interest in WWII and authored several books on war in the Pacific theater. He also wrote two volumes on the history of his 330th Bomb Group.

Frank is survived by his wife Rose Marie Pratt and his four children, Christopher, James, Margaret Hart, and Kenneth, all good looking and successful. His daughter, Mary, predeceased him in 2016. He was blessed with seven grandchildren and seven great-grandchildren. F.J. Bradley will be sorely missed by many for a long time. His legacy lives on.