Answer to Question #9707 Submitted to "Ask the Experts"

I want to learn the difference between mean range and max range in betas. As I know, max range is used for shielding calculation. But then what is the mean range used for? 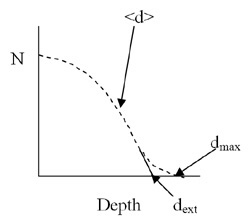 As a point of comparison with electrons/beta particles, we should note that when dealing with heavy charged particles, such as monoenergetic alpha particles for which appreciable scatter is not a significant factor, the above type of penetration curve has a different character. The upper part of the curve is more nearly horizontal until the depth approaches the range of the alpha particles; as the depth of penetration approaches the CSDA range, the curve descends much more sharply than for the case of electrons, and the tail of the curve is shorter. The result is that for such particles the values of dext and dmax are all within a few percent of each other.

The quantity dext in the above figure represents the so-called extrapolated penetration depth or extrapolated range. This quantity is useful when certain experimental measurements are made, most notably measurements made to determine the maximum energy of electrons or beta emitters. This extrapolated quantity is the value obtained by extrapolating the lower straight portion of the penetration curve to the point where it intersects the N = 0 axis. This provides a reasonable estimate of the range that can be evaluated in a comparison with a known beta emitter. The extrapolated range is more easily and more reliably determined than is the experimental dmax value because of the poor statistics associated with the number of electrons present near dmax, leading to a large uncertainty in the estimate of where the curve actually crosses the N = 0 axis.

We should note that the above discussion has treated the electrons or beta particles as being monoenergetic. If one is dealing with all of the beta radiation emitted by a particular beta emitter, the above considerations still apply to discrete energy particles, but the situation is complicated by the fact that the initial beta radiation includes beta particles whose energies range from zero to the maximum beta energy. Naturally, the maximum depth of penetration for a given beta emitter will depend on the maximum beta particle energy, and the above considerations still apply in a qualitative fashion.

In summary, when dealing with electrons or beta radiation, the specification of the range may or may not be a good estimate of the actual maximum depth of penetration. If the CSDA range is being used, and the material of interest has a high atomic number, the maximum penetration depth may be noticeably lower than the CSDA range. The mean ranges are not often directly useful for many practical situations, although they can be helpful in aspects of dosimetry in which one is concerned with the distribution of dose in tissue, since the mean range provides an estimate of the average depth within which one expects many of the beta particles to deposit most of their energy.

I realize the above is probably more of a discussion than you might have had in mind, but I think it is necessary to better understand some of the implications of your question. Hope it helps.

Ask the Experts is posting answers using only SI (the International System of Units) in accordance with international practice. To convert these to traditional units we have prepared a conversion table. You can also view a diagram to help put the radiation information presented in this question and answer in perspective. Explanations of radiation terms can be found here.
Answer posted on 5 May 2011. The information posted on this web page is intended as general reference information only. Specific facts and circumstances may affect the applicability of concepts, materials, and information described herein. The information provided is not a substitute for professional advice and should not be relied upon in the absence of such professional advice. To the best of our knowledge, answers are correct at the time they are posted. Be advised that over time, requirements could change, new data could be made available, and Internet links could change, affecting the correctness of the answers. Answers are the professional opinions of the expert responding to each question; they do not necessarily represent the position of the Health Physics Society.