Answer to Question #11740 Submitted to "Ask the Experts"

I had a Gamma Knife procedure with 16 gray (Gy) administered to my head. I was reading your website along with others, and I found a chart that compares radiation levels. According to http://chernobylgallery.com/chernobyl-disaster/radiation-levels, I have had 16,000 microsieverts (µSv) administered. Exactly how is this not fatal to the surrounding area—why is only one part of the body affected by the Gamma Knife? For instance, if the atomic bomb and Chernobyl produced less radiation, how is a Gamma Knife able to keep radiation in one location of the body?

First, I would like to distinguish the difference between radiation and radioactivity. Think about a glowstick. 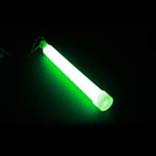 In the Gamma Knife, around 200 (the exact number depends on the Gamma Knife model) pellets of cobalt-60 (60Co) are used as sources of gamma radiation. The gamma radiation from each pellet is shaped into a narrow beam using material that absorbs gamma radiation (e.g., lead and tungsten), just like the opaque tube absorbs the glowstick light in all directions except one. This is called collimation. Each narrow beam is aimed at the brain tumor that is to be treated. The radiation dose to the tumor is the sum of the dose from each beam (16 Gy) with about 0.08 Gy being delivered by each beam. The surrounding tissue receives only the dose from one beam (well actually, a little bit more because of "scattering"). The image below is a two-dimensional representation of what is happening in three dimensions. 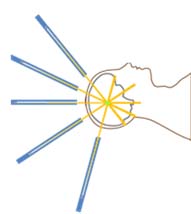 Answer posted on 2 November 2016. The information posted on this web page is intended as general reference information only. Specific facts and circumstances may affect the applicability of concepts, materials, and information described herein. The information provided is not a substitute for professional advice and should not be relied upon in the absence of such professional advice. To the best of our knowledge, answers are correct at the time they are posted. Be advised that over time, requirements could change, new data could be made available, and Internet links could change, affecting the correctness of the answers. Answers are the professional opinions of the expert responding to each question; they do not necessarily represent the position of the Health Physics Society.