Answer to Question #11588 Submitted to "Ask the Experts"

I'm scared and concerned so please answer my question. I'm a medical student and yesterday was my first day in the orthopedics operating theatre. My friends and I went into a room where an operation was being carried out and stood there observing for 15–20 minutes. Another friend came and told us the image intensifier might be working and we might have been exposed to radiation. We went out immediately. I'm not sure if the machine was actually working at that time but it might have been. We were not wearing any protection at all. Nobody in the operation theatre told us to leave, there were no danger signs anywhere.

My question is, if the image intensifier was on, how much danger am I in? I was not wearing any protection and I'm very scared and can't stop thinking about it. Is this one-time exposure going to give us cancer?

It sounds as if your friend who told you "the image intensifier might be working" and that you had "been exposed to radiation" was misinformed, or worse, was trying to scare you. Let's talk a little bit about the C-arm fluoroscope, how it works, and exposures from it.

For purposes of this discussion, the following components of a C-arm fluoroscope will be considered: 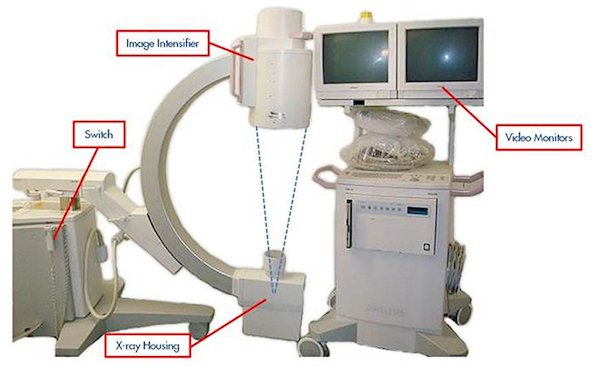 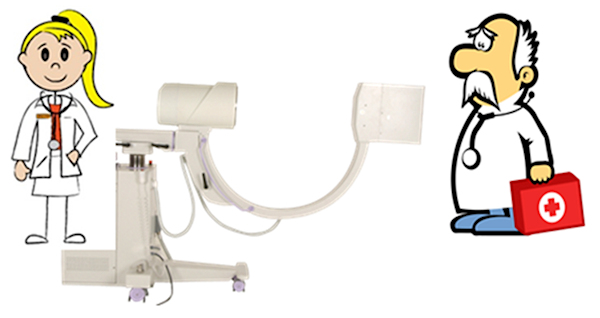 X rays are generated only when the switch is depressed. And the switch is a "dead-man" switch, which means that someone must be actively depressing it for x rays to be generated. Most C-arm fluoroscopic units have a "last image hold" feature. This means that the monitor may show a picture (or even a multisecond loop) of previously recorded images even though x rays are not being generated. So even if you saw an x-ray image on the monitor, that does not necessarily mean that x rays were being generated.

Generally, if you are standing 2 meters (m) away from the part of the patient being examined and the x-ray housing, your exposure is minimal. If you are standing closer on a regular basis, the use of protective apparel and personal monitoring may be warranted.

Your radiation dose from being in the room for a single procedure would not increase your cancer risk in any measurable way.

Ask the Experts is posting answers using only SI (the International System of Units) in accordance with international practice. To convert these to traditional units we have prepared a conversion table. You can also view a diagram to help put the radiation information presented in this question and answer in perspective. Explanations of radiation terms can be found here.
Answer posted on 19 June 2016. The information posted on this web page is intended as general reference information only. Specific facts and circumstances may affect the applicability of concepts, materials, and information described herein. The information provided is not a substitute for professional advice and should not be relied upon in the absence of such professional advice. To the best of our knowledge, answers are correct at the time they are posted. Be advised that over time, requirements could change, new data could be made available, and Internet links could change, affecting the correctness of the answers. Answers are the professional opinions of the expert responding to each question; they do not necessarily represent the position of the Health Physics Society.