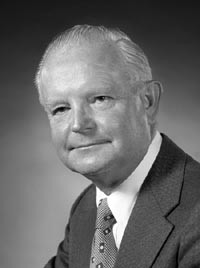 Victor P. Bond, 87, of Richland, Washington, died peacefully on 23 January 2007 after a long illness. Born in Santa Clara, California, Bond received his BA at the University of California (UC) Berkeley in 1943, his MD at UC San Francisco, and his PhD in medical physics from UC Berkeley in 1952. He served as a medical officer in the U.S. Navy from 1945 to 1954, heading the Experimental Pathology Branch of the U.S. Naval Radiological Defense Laboratory in San Francisco from 1948 to 1954. Remaining in the Navy Reserves, he rose to the rank of Rear Admiral.

On 30 December 1954, Bond came to Brookhaven National Laboratory (BNL) as a physician and as deputy director of the BNL team that provided medical care to Marshall Islanders accidentally exposed to fallout from a U.S. nuclear test. He remained at BNL and in 1958 was named senior scientist and head of the radiobiology division. From 1962 to 1967, he was the chairman of the medical department, then was appointed associate laboratory director for life sciences.

Bond vigorously pursued his own scientific interests throughout his long career at BNL as well as serving in senior laboratory management roles. His research centered on two major areas—understanding the acute effects of single large doses of radiation and the scientific basis for protection standards. In both these endeavors, Bond was a brilliant and influential scientist.

His research fundamentally shaped our understanding of the risks of radiation and how this knowledge can be applied to protection standards. His contributions are a major pillar that underpins the scientific basis of the profession of health physics. Bond was the author or coauthor of more than 300 papers and four books.

Among his honors were an Honorary DSc from Long Island University in 1965, the Senior U.S. Scientist Award from the Alexander von Humboldt Foundation in 1984-1985, the Distinguished Scientific Achievement Award from the Health Physics Society in 1986, and the Distinguished Associate Award from the Department of Energy in 1990 for "research accomplishments, insight, and dedicated service that has substantially advanced the scientific basis for radiation protection." He also served as a member of the National Council on Radiation Protection and Measurements (NCRP) from 1964 to 1985, at which time he was elected as an Honorary Member. With the NCRP he served as a member of the scientific committees that prepared Reports No. 43 on "Radiation Protection Philosophy," No. 98 on "Guidance on Radiation Received in Space Activities," and No. 104 on "Relative Biological Effectiveness of Radiations of Different Quality."

His longtime friend and colleague from BNL, Eugene Cronkite (1996), has pointed out that "he was among the first to point out definitively the differences and importance of distinguishing between 'low-level' and 'high-level' radiation exposure and the implications for radiation protection." In 1966 Bond and L.E. Feinendegen published a seminal paper that recognized that for certain biological endpoints it is the individual cell and not the organ that is at risk. Bond developed the concept of "probability of causation" to provide a method to assess risks of low-probability effects after long latency periods. This method is recognized worldwide.

Victor Bond is survived by his four children: Barbara Williams, Frederick Bond, Robert Bond, and Beverley Matthews; their families; and his sister. He was buried next to his wife of 47 years, Mary (Molly) Bond, on 9 February 2007 in a private ceremony at the Calverton National Cemetery on Long Island.

His family requests that contributions in his memory and in honor of his many scientific achievements be made to the National Council on Radiation Protection and Measurements, 7910 Woodmont Avenue, Suite 400, Bethesda, MD 20814-3095.