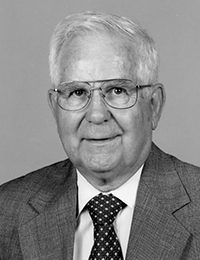 Roger Joseph Cloutier died 27 January 2019 at home in Oak Ridge, Tennessee. Roger was a unique person. He was a devoted husband and father, a scientist who excelled in many different areas of radiological science, and a friend and mentor to many.

Roger was born in North Attleboro, Massachusetts, on 25 July 1930. His father was a jeweler and his mother was a stay-at-home mom. Roger was the 10th of their 12 children. As a young boy, he enjoyed playing in the woods and at the local pond. With the war going on, there were plenty of work opportunities to which he availed himself, including working for a veterinarian, on a farm, in a shoe repair shop, and in a grocery store where one of his tasks was to watch for patrons hiding bags of sugar behind items on the shelves in hopes the item would still be there when they returned with their food ration card!

In high school Roger excelled in math and was the second-string quarterback for the North Attleboro High School football team, graduating in June 1948. Thirteen days before President Truman announced the reinstituting of the draft, Roger enlisted in the US Navy on 7 July 1948 and served honorably until 24 June 1952. During his time in the Navy he served on the USS Gainard, the USS Toledo, the USS Baltimore, and the USS C.H. Roan. He attended training at several naval training centers, including the US Naval Small Craft Facility in Annapolis, Maryland. In addition to his studies at US Naval School Academy & College Preparatory, Roger was on the wrestling team.

After the military, he enrolled at University of Massachusetts (U of M) to study agriculture with the intent to become a veterinarian. Roger and Linda met at the U of M and married in 1954. Their honeymoon was a move to Brookhaven for a summer term; there Roger first learned of health physics. He completed his undergraduate degree in zoology at U of M the following year and received an Atomic Energy Commission (AEC) fellowship in radiological physics to pursue a graduate degree. Roger's path then took him and his growing family to the University of Rochester where he earned his MS in radiological physics.

After completing his MS, Roger went to work for Westinghouse Commercial Atomic Power Division, outside of Pittsburgh, Pennsylvania, in industrial hygiene and health physics. With a desire to "give back" with respect to the AEC fellowship he had received, Roger came to Oak Ridge in 1959 to become the radiation safety officer for the Oak Ridge Institute for Nuclear Studies (ORINS, later to be renamed Oak Ridge Associated Universities [ORAU]) and worked there for the rest of his 33-year career. There he managed health physics, medical physics, radiation emergency management, and environmental science programs, all of which were highly successful and grew over the years.

Roger is probably best known for his passion for training others in radiological safety. In addition to his other management duties, he trained others as he became involved in the ORAU's Special Training Division where he lectured to literally tens of thousands of students and professionals needing health physics training. He also traveled to South America on several occasions with the Atoms for Peace Program, where he lectured in Spanish. He also taught state and Nuclear Regulatory Commission (NRC) health physicists in ORAU's many health physics training courses. The Department of Energy (DOE) Secretary's Certificate of Appreciation was awarded to Roger for his excellence in providing training.

In 1974, the decision to close the ORAU cancer research hospital was made, and as Roger recognized that with its closing, Oak Ridge was left with no place to treat radiation accident victims, he wrote a proposal for the Radiation Emergency Assistance Center/Training Site (REAC/TS). This facility, which began operations in July 1976, is located in the Oak Ridge Methodist Hospital and has been serving not only Oak Ridge's needs, but also those of the entire country with direct onsite help, consultation, and special treatments for internal contamination. REAC/TS is also a World Health Organization resource available worldwide.

Roger also had a keen interest in internal dosimetry, especially for radiopharmaceuticals, and started the Radiation Internal Dosimetry Information Center (RIDIC) for providing the medical industry with reliable dose information for various new treatment protocols using radioactive materials. He and his protégé, Evelyn Watson, excelled in research to establish a methodology for estimating the dose to a fetus when the mother was given a radiopharmaceutical. He also chaired the Society of Nuclear Medicine's Medical Internal Radiation Dose Committee from 1975 to 1979. While serving in this capacity he "reorganized the committee into a more efficient, effective, and securely funded group."

The proceedings of the Sixth Annual International Radiopharmaceutical Symposium in 1996 was dedicated to Roger and Evelyn Watson. Evelyn is a perfect example of Roger's abilities as a mentor. She was initially a "records clerk" as she began her ORAU career but rose over the years to director of the RIDIC program and an internationally renowned scientist. Roger took great pride in her scientific achievements. Roger and Evelyn each received the Loevinger-Berman Award, given by the Nuclear Medicine Society in recognition of their achievements in the field of internal dosimetry.

A few years later, Roger led the effort to establish the ORAU Environmental Survey and Site Assessment Program, which today still serves DOE, NRC, and other federal agencies with verification for radiological cleanup at sites nationwide, even including US Navy ships. This effort also resulted in a major research program at ORAU to determine the extent of mercury contamination in the Oak Ridge community.

Roger was dedicated to serving his profession by being a very active member of the East Tennessee Chapter of the Health Physics Society (ETCHPS), the American Board of Health Physics, the American Academy of Health Physics, and the Health Physics Society (HPS). Roger was a major force behind the formation of the ETCHPS and served in 1964 as its 4th president. He was the HPS treasurer in 1971 and was president in 1982–1983. Roger accomplished some notable achievements within the Society, including the creation of the Fellow Class of membership, the formation of the Power Reactor Section, and emphasis of the need for routine financial disclosure and expanding committee activities.

Roger was the recipient of the HPS Founders Award in 2000 and was awarded the Lifetime Achievement Award by the ETCHPS, the first member to receive this award.

Through support to various health-physics-related societies, Roger's penchant for mentorship is evident as 11 of his protégés have served as president of the ETCHPS, 10 have served as other HPS officers, and 5 have been president of the HPS. Among Roger's protégés, 10 have been named HPS Fellows, 2 have been awarded the HPS Founders Award, and 4 have won the Elda Anderson Award. Roger's protégés certainly followed his example of service to our profession.

Additionally, Roger has led a very active personal life and filled his available time with community-support activities. Civil rights were of particular concern to Roger, and he took an active role in supporting school integration as well as integration of many of the segregated public facilities in Oak Ridge.

He facilitated a new barbershop in Oak Ridge with a commitment from the shop owner that he would cut all peoples' hair, as there was no shop in Oak Ridge where African Americans could get their hair cut. His leadership was evident in the success of many of these efforts. He served as chairman of the nongovernmental Community Relations Council.

He also managed a home health care agency, the Clinch River Home Health organization, when its director was ill. He formed Youth Haven when he learned that underprivileged children were sometimes placed temporarily in jail when their home life was disrupted. He was closely affiliated with the local United Way, organizing fund drives and frequently promoting the goals of United Way.

Many people will attest to Roger's unique ability to see a need and to personally do something to meet it, often through his crafty leadership style to get others involved and to instill in them the same intensity of intent to fix the problem. Most all of his initiatives succeeded primarily because of his personal dedication and commitment, which encouraged others to do the same.

Roger was a practical problem solver as well as a scientist. This combination served him well and he became a person whom a vast majority of those who knew him thought very highly of him and admired his humble nature that most often shuffled off any recognition for his work to those who were following his lead and assisting him in the task. Roger was a truly unselfish and caring person who felt strongly the need to take action . . . and did!

Roger was a mentor to so many young health physicists that we can't possibly know them all. He was our friend and mentor for more than 50 years and we and many others of his health physics colleagues will miss him greatly. The health physics profession has lost a major pillar of its history.