In Memoriam: Peter A. Darnell

by the Cincinnati Radiation Society; photos courtesy of Candace Darnell 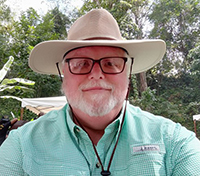 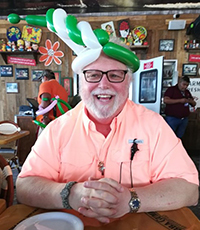 A cigar box guitar made by Peter

Pete Darnell, BS, CHP, RRPT, worked for the National Institute for Occupational Safety and Health (NIOSH) Division of Compensation Analysis and Support as a health physicist (HP) from January 2003 until his retirement in 2020. Before working for NIOSH, he was an HP, nuclear safety subject-matter expert, industrial specialist, and facility representative for the Department of Energy (1994–2003). From 1987 to 1994, he was involved in commercial nuclear, medical, research, and consulting. Pete also served as a NIOSH subject-matter expert for National Special Security Events (NSSE) and an electrician's mate, submarine and radiological control monitor for the US Navy from 1981 to 1987.

Pete's wife, Candy Darnell, shared that "Pete was born 9 April 1962 and passed after a bout with COVID-19 on 25 March 2021. He was a Navy veteran, Fellow of the HPS, member of the CRS, member of the NRRPT, former scoutmaster, and just fun to be around."

Wade C. Morris: "I met Pete through working on the NIOSH Dose Reconstruction Project. He was a NIOSH HP that was always gracious and understanding with me (not having an HP background). While also serving the CRS and attending meetings, Pete and I would always talk about travel and playing music, which I found out he did enthusiastically at his church. After Pete's retirement from NIOSH, he invited me to his house to trade CRS files and also offered me his many HP reference books and files to help further my understanding and career. His insight and guidance were always appreciated and meant a lot to me. He will be missed."

Tim Taulbee: "I first met Pete in 1998 when he worked for the Department of Energy (DOE) at Fernald. I had just started at NIOSH and Pete arranged for a colleague and me to attend and obtain Radiation Worker II training in preparation and support of a Health Hazard Evaluation we were conducting at another DOE site. In the early 2000s, Pete joined the Division of Compensation Analysis and Support at NIOSH and we began working together. We worked together for many years both at NIOSH and within the CRS, where Pete served as president in 2008. I served as CRS president in 2011, during which time Pete was on the CRS Board of Directors. In 2016, Pete served as the HPS Homeland Security Section president. Throughout his career, Pete made significant contributions to both CRS and HPS. His work was finally recognized when he received the Fellow of the Health Physics Society Award in 2018. One of my fondest memories about Pete and his wife Candy is their love of travel (specifically cruises) and fine dining. I always knew at an HPS annual meeting that Pete would be game to join me for dinner at one of the finer restaurants such as Ruth's Chris or a Morton's Steakhouse."