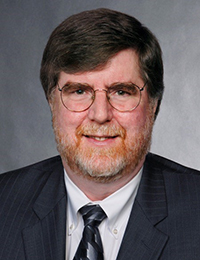 Mike was a 1970 graduate of St. John's High School in Shrewsbury, earned his bachelor's and master's degrees at UMass Lowell, and completed his PhD at the Georgia Institute of Technology in 1983. He had a long career as a health physicist and worked in a number of different career paths, including education, industry, government service, and consultancy. In the field of education, he was an associate professor in the Department of Health Administration and Policy at the Medical University of South Carolina in Charleston, South Carolina. He served as an adjunct faculty member at Vanderbilt University in Nashville, Tennessee; Texas A&M University in College Station, Texas; and the College of Charleston and Charleston Southern University in Charleston, South Carolina.

Mike worked in industry at Oak Ridge National Laboratory in Oak Ridge, Tennessee, and subsequently was Chem-Nuclear System, Inc.'s vice president of Barnwell Operations at the low-level radioactive waste disposal facility in Barnwell, South Carolina. His government service included serving on the Scientific Review Group appointed by the US assistant secretary of energy to review the ongoing research in health effects at the former weapons complex sites in the Southern Urals. He served on several committees of the National Academy of Sciences, producing reports regarding radioactive waste management. He was a member and chairman for two advisory committees to the US Nuclear Regulatory Commission in Washington, DC, for 15 years and also served on the Technical Advisory Radiation Control Council for the state of South Carolina for 19 years. He served as a consultant with a number of national corporations and government agencies, performing work in the fields of radioactive waste management, radiological health, and regulatory compliance for workplace and environmental issues.

Mike was a member of the International Atomic Energy Agency mission to Fukushima to provide assistance in the use of radiation monitoring data to develop maps to be made available to the public. He served for several years on the independent review panel for decommissioning work at Brookhaven National Laboratory. He was chairman of the External Advisory Board for Radiation Protection at Sandia National Laboratories and was a member of a similar external review board for Lawrence Livermore National Laboratory. He also participated in the US Department of Energy's radiological health assessment project in the Marshall Islands for several years.

Mike was the editor in chief of the Health Physics Journal for 18 years and held numerous offices in the Health Physics Society (HPS). He authored and coauthored many refereed articles and publications. Mike received many awards during his career, including the Distinguished Alumni Award at St. John's High School; the Francis Cabot Lowell Distinguished Alumni for Arts and Sciences Award for the University of Massachusetts Lowell; the Academy of Distinguished Alumni at Georgia Institute of Technology; the HPS Elda E. Anderson Award; the Failla Award from the New York Chapter of the HPS at New York University; the Distinguished Public Service Award from the HPS; and the Hodes Award from the Southeast Compact Commission. He was a distinguished emeritus member of the National Council of Radiation Protection and Measurements and was a certified health physicist.

Mike enjoyed travel, golf, and most of all, spending time with friends and family. Those who knew him considered Mike to be one of the smartest people they'd ever met, as well as one of the most passionate. He also had a wicked sense of humor that will be long remembered.

Mike's funeral Mass was celebrated at Blessed Sacrament Church in Worcester, on 29 February, with burial in St. John's Cemetery. In lieu of flowers, donations may be made to the St. John's High School Scholarship Fund, 378 Main St., Shrewsbury, MA 01545, or to any educational institution of one's choosing.