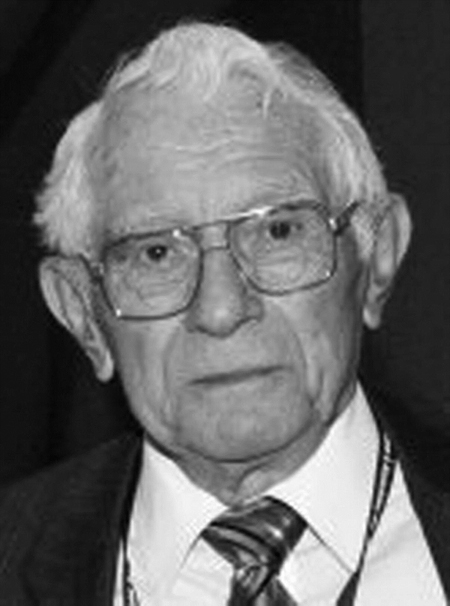 On Wednesday, 2 October 2013, Leo George Faust, a prominent, active 50-year member of the Health Physics Society (HPS), passed away at his home in Pasco, Washington, following a brief illness.

Leo was born on 9 December 1929 in the small farming community of Fingal, North Dakota, 48 miles due west of Fargo. As a teenager, he worked in the fields of farms around Fingal, taking the place of the older men who had gone off to World War II and helping in his father's creamery, making butter and ice cream and delivering these to customers. He attended Fingal High School, where he played on the basketball team. Soon after graduation, after having been advised by his father (president of the local draft board) that he was 1-A and number 2 on the draft list, he enlisted in the U.S. Air Force. He served six years and achieved the rank of staff sergeant before his discharge in 1953. He was justifiably proud of having served his country and enjoyed his time in the service, acquiring considerable knowledge about aircraft and weaponry. He also acquired a collection of interesting anecdotes involving his adventures and, yes, even some misadventures and a large and quite vivid vocabulary that left no mistake in understanding his position on controversial issues.

While still in the Air Force, Leo met a young lady named Louise Baker at the Moon Light Dance Hall in Yuba City, California. They married in 1952 and recently celebrated 61 years together. After serving in the Air Force, he returned to school, choosing Humboldt State University in Northern California, where he acquired a BS in physics. Leo was no stranger to hard work and augmented his GI Bill pay by driving a logging truck and running a gas station for a time.

During a professional career that spanned more than a half century, Leo made numerous contributions to the safety of working with radioactivity. In 1959 he began his professional career with the General Electric (GE) Company at Hanford, holding a variety of positions while simultaneously pursuing part-time graduate study in nuclear engineering at the University of Washington via the Joint Center for Graduate Study in Richland. During his tenure with GE, he was involved with various dosimeter development, shielding, and plutonium dosimetry projects and served for a time as manager of the Radiation Monitoring Section. Particularly noteworthy during this period is his preparation of the Plutonium Manual of Good Practice, which found wide application among operational health physicists at the various Atomic Energy Commission sites working with plutonium. He also prepared and published the first site-wide Radiological Design Manual for use at Hanford.

Following the diversification of the Hanford site in 1965, Leo joined Battelle at the Pacific Northwest National Laboratory (PNNL), where during his 28-year tenure he served in a variety of senior research and research management positions relating primarily to health physics dosimetry and measurement programs, management of organizations, and development and conduct of large health physics and safety appraisal programs. Much of his research work at Battelle involved measurement and characterization of mixtures of plutonium, the design of plutonium-handling facilities, and the management of operational plutonium health physics programs.

Subsequent to his retirement from PNNL in 1992, he actively continued practicing health physics through consulting activities with various firms, primarily M.H. Chew & Associates, where he was involved in activities of broad general importance, including the preparation of technical basis documents for the Energy Employees Occupational Illness Compensation Program Act, as well as oversight and technical direction of a major neutron dose-reconstruction effort for several hundred early production workers at the Department of Energy (DOE) Rocky Flats Site.

Leo organized and chaired 11 International Neutron Dosimetry Workshops spanning a period of 25 years and also served as the DOE representative to the joint DOE/Department of Defense Nuclear Weapons Intrinsic Radiation group and as the chair of the DOE Ad Hoc Committee on Neutron Quality Factor. He further shared his neutron dosimetry expertise by contributing as a technical adviser to the U.S. DOE/National Bureau of Standards (now National Institute of Standards and Technology) program dealing with the establishment of standard neutron sources. An important contribution, not only to the profession but to the regulatory process as well as the general public, was his leadership as cochair of a major U.S. Nuclear Regulatory Commission-funded effort to appraise all U.S. light water reactor health physics and emergency-preparedness programs.

He shared the fruits of his technical work not only through committee activities but via authorship or coauthorship of more than 100 technical reports, papers, articles, and lectures, including being a guest lecturer at the British Naval War College, Greenwich, England, in 1987, 1988, and 1990. Among his more significant contributions is his quiet 11-year tenure as chair of the Nominating Committee of the HPS, ensuring the selection of quality candidates for national office, an especially difficult task during a period of reduced support for professional participation within private industry and government. His other notable HPS activities include a term as associate editor of Health Physics. Leo was elected a Fellow of the Society in 1988 and was the recipient of the 2012 Founders Award (see Health Phys. 103:699–700, 2012) as well as the Herbert M. Parker Award of the Columbia Chapter, which recognizes individuals who most clearly exhibit excellence in the health physics profession in a manner exemplified by Herbert M. Parker. And fittingly, he was subsequently elected a Trustee of the Herbert Parker Foundation at Washington State University Tri-Cities.

Always a man who loved to stay busy and to be productive, in addition to his professional consulting and at an age when many have long since retired to the rocking chair, he drove a school bus for several years. Here, too, Leo was recognized by being named Substitute Bus Driver of the Year by the Pasco School District in 2004. He was a softie as far as the kids were concerned, but he earned their respect and admiration.

As a manager, Leo was sensitive to the professional development of his staff, encouraging them to take additional classes and to contribute to the continuing development of the science and art of health physics through membership in professional bodies, service on scientific committees, and similar activities, thereby providing additional contributions from these younger staff members.

Leo Faust was, in a sense, the quintessential American, with the same hopes and dreams common to all of us. He worked and played hard, met his obligations, and lived what might be termed a near-ideal American life, realizing many of his dreams. He loved to hunt, played a mean game of "Oh Hell" with his coworkers and staff, and enjoyed monthly penny-ante poker games with some old friends and colleagues who thankfully agreed that his poker playing skills, while adequate, were considerably less than his health physics expertise.

He was a down-to-earth, intense, outspoken, and colorful person, particularly in his speech, which could sometimes be a bit on the salty side, but he clearly and unequivocally made his point. And once he made up his mind to do something, it got done. He did it no matter how difficult. For many years he smoked cigarettes, and when told by his doctor one day that he had to quit or face serious and possibly even life-threatening consequences, he quit that very day and, to the best of my knowledge, never again smoked a cigarette—for more than 30 years. And he was a deeply religious Roman Catholic, serving his church for many years as a faithful usher at the 8 o'clock Mass.

He loved and treasured his family and friends. He was devoted to his wife Louise, his daughter Tanya, and his three granddaughters: Kitty (Katavera), Jesse (Jessica), and Nikki (Nicole).

He leaves behind a legacy not only in his tangible professional accomplishments, but by his dedication to his profession and to his colleagues, friends, and school bus riders in whom he instilled, by example, the traditional American values of hard work, God, and country in which he so strongly believed.