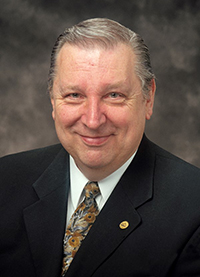 Joe McDonald, 80, of Pasco, Washington, passed away peacefully on 14 May 2022. He will get to spend his eternity with the love of his life. He was preceded in death by his parents, Charles Edward McDonald and Elsie Frances (Pokorny) McDonald; his sister, Dorothy (McDonald) Cheeks; and his wife of 45 years, Virginia (McCarrick) McDonald. Joe is survived by his daughter, Kimberly Christine (McDonald) Banks; Kimberly's husband, Darryl Lee Banks; and Joe's grandchildren, Zachary Daniel Banks and Victoria Grace Banks and a baby girl on the way. Joe was born on 9 April 1942 in New York City. He graduated from Long Island City High School in 1959 and in 1963 earned his BA in physics and mathematics from Hunter College in the Bronx, New York. He earned his MS in physics in 1965 at New York University. After graduate school, he worked at Columbia University's Hudson Laboratories, carrying out underwater acoustics research for the Office of Naval Research. While working at Hudson Laboratories, he met his wife-to-be, Virginia McCarrick. Joe and Virginia were married on 12 October 1968.

After Hudson Laboratories closed, Joe began work at the Memorial Sloan-Kettering Cancer Center in New York City, where he was appointed an associate of the Sloan-Kettering Institute. He worked there from 1967 to 1980. His research focused on improving the treatment of cancer using radiation therapy. Joe was also appointed assistant professor of biophysics at the Cornell University Medical College. From 1980 to 1982 he held an appointment as a medical physicist in the Department of Radiation Oncology at the University of California at Los Angeles Medical School, also serving as an adjunct associate professor of radiation oncology. He was a member of a team that developed a cyclotron for neutron radiation therapy and medical isotope production.

Joe then joined the staff of the Pacific Northwest National Laboratory (PNNL), Richland, Washington, in 1982, and he retired in 2005 as a laboratory fellow, the highest scientific rank at PNNL. His work included development of a nationally accredited radiological testing laboratory for the Department of Energy, carrying out precision measurements of ionizing radiation, developing radiation detectors, and making use of high-intensity radiation for sterilization and other industrial processes. He also served as vice-chairman of the Panel on Reference Nuclear Data at Brookhaven National Laboratory.

In the wake of 9/11, Joe was called on to develop a testing and evaluation laboratory for the Department of Homeland Security (DHS). His work for DHS was recognized by Dr. Penrose Albright, the senior director for research and development and deputy secretary of the Office of Homeland Security.

Joe was coinventor and copatent holder for the development of a radiation dosimeter that was marketed by Landauer Inc. as the Luxel optically stimulated luminescence (OSL) personnel dosimeter. This dosimeter was recognized with an R&D 100 Award as one of the 100 most significant inventions of the year 2000. Joe's research resulted in the publication of over 150 scientific papers and reports. He was also coauthor of two books: Dosimetry for Radiation Processing and Advanced Radiation Protection Dosimetry. He served for 14 years as editor in chief of the scientific journal Radiation Protection Dosimetry. He was a chairman for, and a coauthor of, two reports for the International Commission on Radiation Units and Measurements. He also served as a member of, and a chairman of, several standards committees for the International Organization for Standardization. Joe also chaired, or served on, writing committees for the American National Standards Institute, the American Society for Testing and Materials, and the Health Physics Society Standards Committee. After retirement, Joe volunteered at PNNL for 10 years as an emeritus laboratory fellow. He also taught physics at Columbia Basin College and Washington State University Tri-Cities.

Joe was a member of, and held offices in, several scientific societies. He was a fellow of the American Physical Society and a fellow of the Health Physics Society. He was also a longtime member of the Radiation Research Society, the American Association of Physicists in Medicine, and the National Institute of Standards' Council on Ionizing Radiation Measurements and Standards, where he served as chairman and received the Randall S. Caswell Award. Joe was also a member of Sigma Pi Sigma, the Physics Honor Society, and the New York Academy of Sciences. In retirement, he did volunteer work for the Pasco Aviation Museum, located in the former WW II Naval Air Station Tower at the Tri-Cities Airport.

Memorial contributions may be made to the Pasco Aviation Museum. Thank you so much to all his friends far and wide. You all had a special place in his heart.