by the Martin family 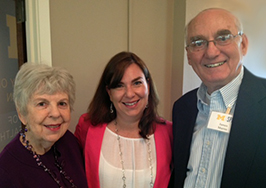 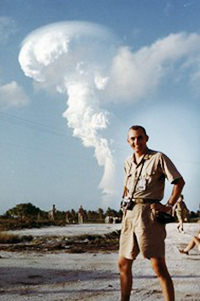 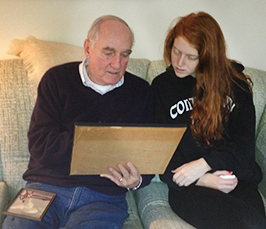 James (Jim) Martin, 87, of Ann Arbor, Michigan, passed away peacefully at home in July 2022, surrounded by his family and loving caregivers. Jim grew up near Shelbyville, Tennessee, in a small rural area known as Poplins Crossroads. The values and work ethic he learned from his parents and neighbors in this tight-knit community grounded him, and he maintained close friendships with many of his classmates throughout his life. Following high school, on a whim Jim enrolled in a local junior college, where he was introduced to his life's passions—physics, nuclear energy, and radiation protection. These interests led him on a remarkable path, and he would become integral in the nation's transition from the use of atomic energy for nuclear weapons to its use in medicine and nuclear power.

In 1956, Jim earned a BA in physics from Vanderbilt University and joined the US Public Health Service (USPHS), a decision he called pivotal for his life's trajectory. His first assignment was to evaluate radioactive fallout clouds in Nevada as part of post-World War II nuclear weapons testing initiatives, which was followed by an assignment in the South Pacific measuring radiation levels in the environment, food, and water pathways. The USPHS directed Jim to the University of Michigan School of Public Health where he received his MPH and PhD in 1965. While in Ann Arbor, he met the love of his life, Barbara Jane Warren, and they were married in November 1964. Upon completion of his studies, they returned to the South Pacific and he directed the USPHS environmental radioactive laboratory in Honolulu, Hawaii, where they loved exploring the islands and called this time their extended honeymoon.

The USPHS then sent them to Washington, DC, where he helped launch the Environmental Protection Agency (EPA) in 1970. While at the EPA, Jim authored multiple national radiation safety standards, including environmental standards for nuclear power plants. Through an interagency assignment, he led the Colorado State Health Department's efforts to create a hazardous waste program and crafted state legislation to establish the first hazardous waste disposal site in Colorado. In 1982, Jim returned to Ann Arbor to join the Environmental Health Sciences faculty at the University of Michigan School of Public Health (SPH), where he shared his expertise in radiological health with a new generation of students. In addition to his teaching, Jim published two books tailored for graduate education in radiation safety and continued to serve in leadership capacities at the state and federal levels. He was appointed by Michigan Governor Jim Blanchard to chair the state's Toxic Substance Control Commission and was tapped by the US Senate to serve on the Department of Energy's Advisory Committee on Nuclear Facility Safety, which visited every major nuclear facility in the country to conduct safety reviews following the Chernobyl crisis in 1986. Jim was a warm and kind, happy, and easygoing man. He was quiet and modest. He loved skiing in the Rocky Mountains, Arnold Palmer drinks after a round of golf at Radrick Farms, long naps, comics, peach pie, German chocolate cake, and reading. Most of all, he was happiest spending time with Barbara, his beloved wife of 58 years. He was measured in his approach to life's ups and downs and when he was saying goodbye often said, "Stay loose." Known as "papa" by his wonderful caregivers, in his later years he enjoyed reading his memoir and reflecting on his life. He felt enormous gratitude for all of his experiences and what he called his "American Dream."

Jim is survived by his wife Barbara, brother Charles (Faye) Martin, daughter Jenifer Martin (Mark Fendrick), and four "step-grands," Alison, Joshua, Daniel, and Claire Fendrick. He is preceded in death by his parents, Frank and Virginia Martin, his sister, JoAnne Martin Burkhart, and many friends and colleagues. Our family wishes to thank his exceptional caregivers who gave him every possible comfort and kindness. Memorial contributions in his honor may be made to the James E. and Barbara W. Martin Scholarship Fund at the University of Michigan School of Public Health.

by Jim Carey, University of Michigan

My first interactions with Jim were with those SPH students that wished to pursue medical health physics. Jim would direct them my way. They would spend their summer trimester at University Hospital in the Division of Nuclear Medicine. Some of them would write their master's thesis on a nuclear medicine-based topic. Jim and I would interact as members of their thesis committee. We became friends.

Jim eventually asked me to be his golf partner in a U of M faculty league. We were partners for over 20 years. Neither Jim nor I were great golfers. But Jim was the only golfer I knew that would putt harder downhill and softer uphill. (He also played with his daughter's hijacked clubs.) I would not hesitate to tell Jim when he had a terrible shot. Jim, on the other hand, was always kind to me and my terrible shots. He was also kind to the competition. If an opponent was having a bad round and I mentioned it, Jim would always say, "Well bless his heart." We had great fun! Those nine holes of golf were a highlight of the week! When Jim stopped playing, I stopped playing. It was not the same.

I will remember Jim as a kind, gentle man with a great mind and a compassionate soul. And a great golf partner (bless his heart)!