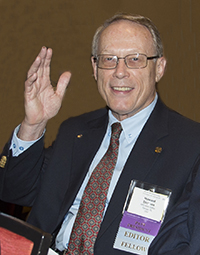 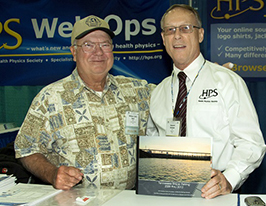 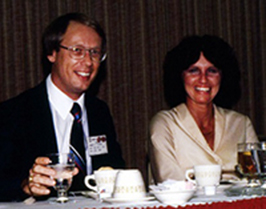 Rita accompanied Howard to almost every HPS meeting, including this one in 1981. Photo courtesy of HPS

Friend, colleague, and role model to many in our Society, Howard Dickson lost his battle with cancer on 17 September 2022 at the age of 80. Throughout his 50-plus-year career, Howard was a tireless promoter and leader in the health physics profession and the Health Physics Society (HPS). Howard's warm smile, sage counsel, and extraordinary service to the health physics profession and HPS will be greatly missed.

Howard was born on 5 June 1942 in Grove City, Pennsylvania, to John Jr. and Alice Dickson. He was the eldest of three brothers. Howard graduated from high school in 1960 and went on to attend Slippery Rock University, earning a BS degree in education. Desiring to further his education, he applied for graduate fellowships and received an Atomic Energy Commission (AEC) health physics fellowship, allowing him to move his young family and continue his education at the University of Tennessee, earning an MS degree in health physics in 1967. The same year he accepted a health physics teaching position at Oak Ridge Associated Universities (ORAU).

For over 40 years, Howard pursued a career as a safety professional, specializing in radiation safety or health physics. As his career developed, he took on progressively greater supervisory and management roles. In 1972, Howard began work in the Health Physics Division at Oak Ridge National Laboratory and continued there until 1983 when he started to work for Bechtel National on environmental cleanup projects. In 1991, he moved to Las Vegas and worked for EG&G at the Nevada Test Site (NTS), progressing rapidly up the management chain until he was promoted to senior vice president and deputy general manager in 1995. Howard's next position was as environment, safety, and health (ES&H) manager with Johnson Controls at Lawrence Livermore National Laboratory, 1999–2000. His last full-time job was as vice president for homeland security projects at EG&G in Gaithersburg, Maryland, in 2000, and he continued there until retirement in 2008, when he continued work with his own consulting company.

Howard contributed significantly to his profession through service to the HPS and American Academy of Health Physics (AAHP), serving as president of both organizations. He received countless awards and honors in his field of practice.

Howard's service to the HPS was exemplary. He joined the East Tennessee Chapter in 1967, which launched a life-long friendship with Jack Beck. Howard became a member of the national HPS in 1972, served as Society treasurer in 1981–1983, and was a member of the Board of Directors in 1983–1984. He was the Society's parliamentarian from 1999 to 2000 and again served on the Board in 2008–2011 as president-elect, president, and past president. Howard has also served five times as an HPS delegate to the International Radiation Protection Association (IRPA) international congresses. He served on numerous committees including the Rules Committee, Annual Meeting Place Committee, and Radiation Safety Without Borders Ad Hoc Committee, to name a few. Howard was a member of the East Tennessee, Lake Mead, Northern California, Baltimore-Washington, and Florida Chapters of the HPS. In March 2012, he participated on the HPS Panel on Fukushima at the National Press Club.

And if that was not enough support to his profession and its professional societies, Howard volunteered to be the Society's web operations editor in chief, a labor-intense and sometimes stressful job. Howard took on the job in 2010 and continued to serve until mid-2018. His remarkable career was highlighted by receiving the 1981 HPS Elda E. Anderson Award, 2000 HPS Fellow Award, and 2018 HPS Founders Award.

Residing in Pennsylvania, Tennessee, Nevada, California, and Florida, Howard contributed to each community along the way. A beloved husband, father, grandfather, brother, and uncle, family was very important to Howard.

His children recall his passion for wine making and many family trips to pick wild blackberries. He coached some of his children's sports teams and took his young sons on fishing trips on weekends. "He took his briefcase and calculator with him to do his work," his son Joel remembered, "but he spent almost as much time fixing our crow's nests and retying lines as he did getting work done." Howard especially enjoyed fishing with his friend and fellow health physicist Jack Beck. He also enjoyed times with his family playing poker with other families. "He was a terrible bluffer," Joel recalled, "which is a sign that he would have been a bad liar in real life as well. And that's a good thing, confirming his honesty, integrity, and ethics."

"Affectionately known as Grampuh Howard, he loved spending time with his two grandsons, Kevin and Anthony," Howard's daughter Tracey said. "He loved being with his grandsons whether it was seeing the manatees or attending home games at Duke."

Howard was an avid and passionate kayaker, chess player, and jogger. Since moving to Tampa, he added dinner cruises to his list of activities.

Howard is survived by his wife of over 60 years, Rita, and their four children, Christine, Tracey, Joel, and Trevor; grandsons Kevin and Anthony; and brothers Tom and John and his family.

Donations in Howard's name can be made to the American Cancer Society. A memorial service and celebration of his life will be held in spring 2023.