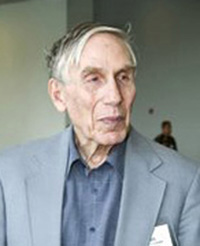 Bernard L. Cohen, professor emeritus of physics at the University of Pittsburgh (UP) and longtime member of the Health Physics Society (HPS), passed away on 17 March 2012. Bernie never stopped learning. This semester, at the age of 87, he began sitting in on an astronomy class in anticipation of teaching it in the future, but pancreatic cancer intervened.

The UP once was the home institution for an eclectic mix of experts all claiming insightful knowledge of radiation risks and effects, both pro and con. There was the avowedly antinuclear physicist Dr. Ernest Sternglass (one of only two people ever censured by the HPS Board of Directors) and occupational medicine physician Dr. Thomas Mancuso, lead researcher of the Atomic Energy Commission Health and Mortality Studies and first author of the controversial 1977 Hanford health study that claimed radiation to be very dangerous. In the middle of the road were epidemiologist Dr. Ted Radford, who had chaired the 1980 Committee on the Biological Effects of Ionizing Radiation of the National Academy of Sciences (BEIR III) Committee, and Dr. Niel Wald, HPS past president and a hematologist. On the pronuclear side, to provide balance, there was Bernie Cohen, nuclear power apologist extraordinaire. When Bernie Cohen and Ernest Sternglass appeared together, the "Ernie and Bernie" show was memorable.

As an example of his extraordinary creativity, Bernie pioneered many innovative ways of communicating risk and, to some extent, safety. In the early 1970s, he presented a risk scale for radioactive waste: how much water would you need to dilute it in to meet drinking-water standards? This put an understanding of radioactive waste within the grasp of ordinary people.

In its 1977 Publication 26, the International Commission on Radiological Protection (ICRP) formalized risk and acceptable risk as a basis for radiation protection. However, in the years that followed, there was a vacuum of knowledge about quantitative risk analysis. Two years later, Bernie presented his "Catalog of Risks" at the HPS meeting in 1979 in Philadelphia, and many health physicists became enamored of his simple scale of lost life expectancy to compare risks. Updated versions of these comparisons are enshrined today in guidance for rad-worker training.

With the great radon awakening in 1984, Bernie saw the opportunity to make comparisons between doses associated with nuclear power and those associated with the natural and technologically enhanced environment. He made measurements using traditional techniques and later developed the diffusion-barrier charcoal adsorption detector, which had a longer integration time and less temperature and humidity dependence than the open-face model used by the Environmental Protection Agency. Using data from his Radon Project, he developed a massive database of primarily self-selected, lowest-livable-area-in-the-house radon concentration from around the country. With the confidence typical of a physicist, he embarked into radiation epidemiology. He used a study design known as the ecological design, in which geographical average radon values were compared with geographical average lung-cancer rates. His results pleased those who favored hormesis, and he became the spokesperson for the notion that low doses of radiation are actually protective. However, due to the weakness of the ecological study design, his results were never accepted by mainstream epidemiologists and risk analysts at the National Academy of Science, the National Council on Radiation Protection and Measurements, or the ICRP.

Bernie wrote six books, including Heart of the Atom (1967), with translations in French, German, Italian, and Japanese; Concepts of Nuclear Physics (1970), with translation in Arabic; Nuclear Science and Society (1974); Before It's Too Late: A Scientist's Case for Nuclear Power (1983); and The Nuclear Energy Option, Alternative for the Nineties (1990), in translation for Japanese and Spanish. He wrote approximately 135 research papers on basic nuclear physics, about 300 scientific papers on energy and environment (e.g., nuclear power, health effects of radiation, radioactive waste, risks in our society), and about 80 articles in popular magazines such as Physics and Society, National Review, Oui, Science Digest, Catholic Digest, and Scientific American. He authored scientific studies and editorial contributions on a vast array of subjects in nuclear-industry trade journals such as Public Utilities Fortnightly, Reviews of Modern Physics, Nuclear Engineering International, and American Journal of Physics.

In 1992 Bernie received the Distinguished Scientific Achievement Award from the HPS. In 1981 he received the Tom W. Bonner Prize in Nuclear Physics from the American Physical Society (APS) and was also elected chairman of the APS, Division of Nuclear Physics (1974-1975). In 1996 the American Nuclear Society (ANS) recognized him with the Walter H. Zinn Award "for a notable and sustained contribution to the nuclear power industry that has not been widely recognized." Also, the ANS granted Bernie its 1985 "Public Information Award," and its 1996 "Special Award," for his "meritorious contributions in research" on Linear Dose Model [Versus] Other Models for Critical Dose Values. He was elected chairman of the ANS Division of Environmental Sciences (1980-1981). Additionally, he was elected as a member of the National Academy of Engineering in 2003, "for fundamental contributions to our understanding of low-level radiation."

Throughout his career in radiation risk analysis, Bernie maintained the highest standards of ethical and professional behavior, as well as a great sense of humor. He once told Dan Strom, "If only radiation stunk, it would be easy to keep people safe."

Bernie was a gentleman and a scholar, a passionate researcher, a prolific author, and a great and patient mentor. He was very accessible and always seemed to have time for students. As described above, he was incredibly innovative. He argued respectfully. He wrote and spoke plainly and clearly. In the history of health physics, risk analysis, and risk communication, he had no equal. He will be missed.