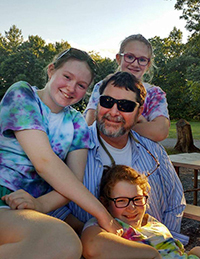 Thomas Patrick Johnston, 61, of Frederick, Maryland, entered heaven on 27 December 2019 by way of Frederick Memorial Hospital in Frederick, Maryland. He valiantly fought a 10-month battle against a rare and aggressive form of bladder cancer; ultimately, even the most respected specialists in their field could not hold this vicious foe at bay.

It is not possible to adequately summarize a man's life—especially not a man whose absence leaves such a gaping chasm—in just a few lines of text.

The son of Patricia (Kolkoski) Johnston and Albert Sidney Johnston III, Thomas was born in Phoenix, Arizona, in May 1958. The majority of his formative years were spent in the Ocean Springs/Biloxi area of Mississippi. He graduated from Notre Dame High School in Biloxi. He served honorably in the United States Navy (USN) as a nuclear engineer aboard the USS Truxtun CGN-35, a nuclear-powered guided missile cruiser, serving for an extended period of time in the Persian Gulf during the Iranian Hostage Crisis. Following USN service, Thomas went on to earn his BS in health physics from Thomas Edison State College. He pursued his MPH in epidemiology at New York Medical College, where he also served as radiation safety officer, and held faculty appointments in the Medical School and the School of Public Health, teaching graduate-level courses. At the time of his death, he was a health physicist, training manager at the National Institute of Standards and Technology in Gaithersburg, Maryland.

Thomas was quick to help where help was needed. He served in a wide array of elected and volunteer positions in his field. He was active in the Health Physics Society, serving on the History Committee, the Society Support Committee, and the First Responder Assistance Team. At the time of his death, he served on the organization's Board of Directors. He served in the Medical Reserve Corps as a health physicist. A lover of science and a believer in the value of education, he served as a science fair judge in Montgomery and Frederick counties in Maryland.

He was an avid writer and editor, contributing to and editing for a host of professional, scientific, and also philatelic publications. A man with an insatiable desire for learning, he was forever researching biographical information and publishing historical articles about everything from women in science to his own discovery of a time capsule in Australia. He never stopped surprising even those who knew and loved him best.

As much as he loved science, learning, and history, Thomas loved his family, sailing, and fishing even more. It was his family connection to the true story of The Perfect Storm that led him to meet his wife, Dawn (Bailey) Johnston, in Vero Beach, Florida. After marrying, they moved to Maryland, where they were blessed with three beautiful daughters: Eliza Grace (16), Audrey Rose (15), and Abigail Joy (12). His wife and daughters love—and mourn—him fiercely.

Thomas is predeceased by his parents; his brothers, Paul Johnston and Timothy Johnston; and his first wife, Sylvia (Bracciante) Johnston, with whom he had no children.

In lieu of flowers, a fund has been initiated to support the Johnston daughters through GoFundMe (Team Johnston).