by Dave Myers and Ken Kase 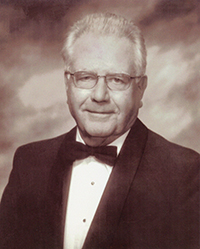 Photo courtesy of the Griffith family

Richard "Dick" Griffith passed away on 16 February 2020 at University of California (UC) Davis Medical Center Hospital in Sacramento, California, at the age of 82. Dick was born on 18 December 1937 to George and Josephine Griffith in Evanston, Illinois, and grew up in Skokie, Illinois. He graduated from Northwestern University and served his country in the Air Force, retiring as a lieutenant colonel in the Air Force Reserves.

Dick received a master's degree in nuclear health physics from UC Berkeley and worked for the Lawrence Livermore National Laboratory (LLNL) for more than 20 years. His first position at LLNL was as the Radiation Counting Lab supervisor and his last was as the Special Projects Division leader, a role he filled for 10 years. While at LLNL, Dick worked on the development of nuclear track detectors for neutron dosimetry. He achieved international recognition for that work as well as for his work developing realistic torso phantoms for use in calibrations by transuranic nuclide lung counting facilities.

Following his tenure at LLNL, Dick and his wife Marsha moved to Vienna, Austria, for 10 years after he accepted a position with the United Nations, serving as a diplomat and technical advisor with the International Atomic Energy Agency (IAEA), Division of Radiation and Waste Safety. While at the IAEA, he served as a consultant to member states on radiation counting equipment and facilities, and he coordinated the development of IAEA radiation safety documents. In addition to his LLNL and IAEA work, Dick served on the Executive Council of the International Radiation Protection Association (IRPA) as publications director from 2000 to 2012 and as an editor of the Health Physics Society's Health Physics Journal for 25 years.

After retiring from the IAEA, Dick and Marsha resided in Woodbridge, California. Dick was active in his church and was a volunteer on the Board of Woodbridge Greens Association and for Loel Senior Center Meals on Wheels. He also became a became a master gardener. Dick loved telling dad jokes, although the quality of those jokes was a matter of family debate. He relished annual trips with Marsha, close friends, and family to Hot August Nights in Reno. He was brilliant, loving, caring, kind, and funny. And he liked listening to Johnny Cash and Roy Clark.