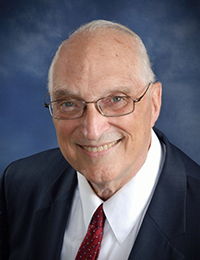 R. Thomas "Tom" Bell III, FHPS, passed away suddenly on a cruise with his dear wife Kathie on 1 October 2019. Tom was born in Columbus, Ohio, on 23 December 1938, the oldest of three children. Tom and Kathie were married for over 55 years; they were best friends and soulmates.

Tom was president of Belsar Associates LLC, specializing in environmental, safety, and health (ES&H) and in dose reconstruction efforts on behalf of both atomic veterans who participated in the atmospheric nuclear weapons tests at the Pacific Proving Grounds and the Nevada Test Site and for nuclear weapons workers at Department of Energy (DOE) laboratories and facilities. Tom was assigned to the Defense Nuclear Agency to serve as the Department of Defense (DOD) program manager for the Nuclear Test Personnel Review. He was responsible for documenting participation and recorded radiation exposure and developing radiation dose reconstructions for atomic veterans. Tom initiated and directly supervised multiple contracts to develop dose-reconstruction methodologies needed to assess radiation exposures received by nuclear test participants.

Tom also helped in the development of audit reports of the National Institute of Occupational Safety and Health site profiles defining dose reconstruction methodologies to assess adequacy and completeness of dose assessments for DOE weapons workers. Tom also served as the director of the Health Physics Programs Division (EH-411) within the DOE. He was instrumental in the development of the DOE RADCON Manual and 10 CFR 835. As a technical staff consultant for the National Council on Radiation Protection and Measurements (NCRP), Tom prepared radiation dose assessments for atomic test veterans as an independent "2nd opinion" expert and also helped develop NCRP Report 164: "Uncertainties in Internal Radiation Dose Assessment," released in 2009.

Tom was a trained health physicist with extensive experience in all ES&H disciplines. During his 26 years as a Navy radiation health officer, he served the chief of Naval Operations (OP-45) as head of the Radiological Control and Health Branch in one of his last assignments. Tom was the driving force within the Navy when the Nuclear Regulatory Commission (NRC) granted the Navy a "Master Materials License," which consolidated all NRC licenses held by individual commands into a single Navy license (the Navy program is larger than many Agreement States in scope). He was also a member of the Navy Command Center Crisis Action Team specializing in matters involving nuclear weapons accidents and participation, as required, in world-wide emergency preparedness operations and exercises. Tom also served as the program administrator for the US President's appointed Veterans Advisory Board on Dose Reconstruction (September 2008–September 2009) advising the US DOD and Department of Veterans Affairs on Atomic Veterans and their potential health issues from exposure to nuclear radiation.

Tom is survived by his wife Kathie and two sons, R. Thomas Bell IV and Christopher Bell and his wife Mason. He is also survived by four grandchildren.

Tom will always be lovingly remembered by this friends and family for his generosity, compassion, and love for others as well as being a gentle giant of health physics.