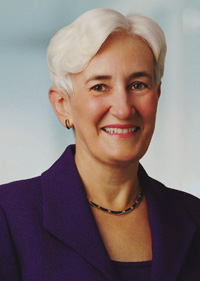 Gail de Planque’s career began in 1967 when, after graduation from Immaculata College, she joined the Atomic Energy Commission (AEC) Health and Safety Laboratory (HASL) in New York City as an entry-level research physicist. Gail recounted years later that she was told to not expect much in the way of opportunities for advancement because women would eventually leave for marriage.

One year after joining HASL, she coauthored with Harold Beck an AEC report on gamma radiation from sources in the ground followed by a note to Health Physics, the first of a long list of scientific publications written or coauthored by Gail. She became a recognized expert on environmental radiation measurements. By 1982 she was deputy director and in 1987 became director of HASL, renamed the Department of Energy (DOE) Environmental Measurements Laboratory (EML). EML was renowned for its global fallout monitoring program and research on radon, radiation dosimetry, and problems associated with nuclear activities. During Gail’s tenure, EML’s global network of radiation measuring stations, in collaboration with international partners, provided important scientific information on environmental radiation from energy technologies and national security activities. For Gail, her time at HASL/EML was the beginning of a personal international network of colleagues and friends.

While at HASL/EML, Gail received an MS in physics in 1973 from the New Jersey Institute of Technology. Interestingly, her thesis was “Radiation Induced Breast Cancer from Mammography." In 1983, she received a PhD in environmental health sciences from New York University. Gail was a Fellow and past president of the American Nuclear Society and Fellow of the American Association for the Advancement of Science. In addition to the Health Physics Society (HPS), she was a member of the Association for Women in Science, American Physical Society, and New York Academy of Sciences and elected member of the National Academy of Engineering and the National Council on Radiation Protection and Measurements. She was active in the founding of the Pacific Nuclear Council and served as its president. She was the recipient of numerous awards for her pioneering role as a woman in science and contributions to the peaceful uses of nuclear energy.

Gail was the first woman and first health physicist to become a Nuclear Regulatory Commission (NRC) Commissioner. Her first talk as Commissioner was to the HPS Baltimore-Washington Chapter—its title, “Who Is the Health Physicist of Tomorrow (And What Does She Look Like?)." Her second talk as Commissioner was to the NRC Federal Women’s History Month Celebration, “Women’s History - A Patchwork of Many Lives." At NRC she often had a pivotal role in matters relating to equal employment opportunities, flexiplace and flexitime, sexual harassment policy, and management. On personnel matters she led by example—her staff included the sharing of a position by two part-time employees, both women.

Her approach to policy matters at NRC was “What is the problem to be solved?" She did not hesitate to question existing policy. One of her earliest decisions at NRC involved how to implement revision of Part 20 dose limits in a staged manner—the Commission had previously agreed upon different dates for NRC and Agreement State licensees. NRC staff, encountering difficulties in meeting the schedule for developing Regulatory Guides, etc., asked the Commission for a delay in implementing the rule. Gail, seeing in the staged schedule a potential for conflicts, confusion, and mixups on the part of health physics service providers, convinced the Commissioners to revisit its decision and, in a 4-1 vote, the NRC placed all licensees on the same schedule. Chairman Ivan Selin, the holdout, remarked afterwards to a reporter, “The lady is simply terrific."1

Perhaps her most significant accomplishment at NRC was a letter. HPS Past President Marv Goldman and the late Shlomo Yaniv briefed Gail on a trip they had taken to Russia. At the time, the Soviet Union was breaking up and perestroika resulted in access to formerly closed, secret Soviet nuclear sites. Goldman and Yaniv informed Gail of the unique opportunities at the Mayak nuclear facility near Chelyabinsk for research into human radiation health effects and environmental contamination. Russian scientists there were eager for western collaboration and support for conducting the research. The result was a letter from NRC Commissioner de Planque to Assistant Secretary of State Robert Gallucci urging this be pursued. On 14 January 1994, Secretary of State Warren Christopher and Russian Foreign Minister Andrey Kozyrev signed a bilateral agreement that created the framework for joint American-Russian cooperative radiation health effects research. The research has produced a rich body of data on radiation health effects and environmental transport of radioactive material2; the research continues today.

Following completion of her term at NRC, Gail moved to the private sector but was asked by the International Atomic Energy Agency (IAEA) to chair a high-level advisory committee to oversee an IAEA environmental assessment of the former French nuclear test sites in Mururoa and Fangataufa in the South Pacific. The IAEA assessment was requested by the French government following termination of testing at the atolls. There were 41 atmospheric tests and 137 underground tests consisting of a mixture of nuclear weapon explosions and nuclear weapon safety trials. The committee consisted of 14 members from various countries, including the past and then chairmen of the International Commission on Radiological Protection (ICRP), Dan Beninson and Roger Clarke, and ex-officio members of the European Commission, the South Pacific Forum, the United Nations Scientific Committee on the Effects of Atomic Radiation, and the World Health Organization. Besides the committee and IAEA staff, 55 experts from 21 countries were involved. This was not a desk exercise and the committee spent considerable time on-site during the two-year study, as well as briefing local officials after completion of the study.

The study, one of the largest and most complex undertaken by the IAEA, was judged a success by the scientific community. It was well received by the French and local governments. Greenpeace International stated that it could serve as a model for similar studies.3

It was not surprising that Gail’s counsel was sought also by the private sector. She founded and was president of Strategy Matters, Inc., and served on the boards of Northeast Utilities Corporation, British Nuclear Fuels, EnergySolutions, Inc., Landauer, Inc., TXU Corporation, and BHP Billiton.

An athletic woman, Gail was an avid tennis player, golfer, and skier. She enjoyed good company, loved the performing arts, and was fond of good food and fine wine (she named her cats Merlot and Chardonnay). She successfully beat breast cancer (note her master’s thesis on page 20) but in 2008 contracted Lyme disease. Lyme disease is readily treatable when diagnosed early and correctly. If not, the consequences can be debilitating and difficult to remedy. It is a disease whose mortality rate is described in some literature as “negligible."

“Negligible" is not zero.

Gail passed away 8 September 2010, leaving behind an enormous family of friends and colleagues worldwide who will miss her wise counsel but especially her warmth and humor.

On the 18th floor of NRC’s One White Flint North Building, the center hallway houses a gallery of photographic portraits of the NRC Commissioners. Prior to having her official NRC photo taken, Gail viewed the gallery and noted that, besides the obvious fact the NRC Commissioners up to then were all men, there was another common factor—only a few smiled and then only slightly.

So, Gail’s portrait became the first of a woman Commissioner—and she is smiling broadly.