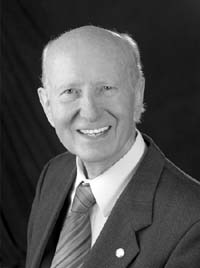 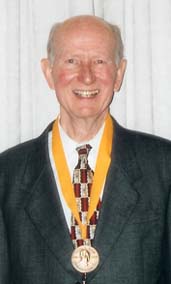 Dade W. Moeller, a past president of the Health Physics Society (HPS) and cofounder of the company that bears his name, died peacefully at home from complications due to cancer on 26 September 2011 in New Bern, North Carolina. Dade enjoyed 84 years of vitality, learning, teaching, love, and laughter.

Born in 1927 in the small town of Grant, Florida, Dade came from humble beginnings where he learned the value of hard work and ingenuity. He joined the U.S. Navy in 1944 at age 17 and served until the war's end. He graduated magna cum laude from Georgia Tech in 1948 with a bachelor of science degree in civil engineering and a master of science in sanitary engineering. After graduating, Dade became a commissioned officer in the U.S. Public Health Service (PHS), with duty stations including Oak Ridge National Laboratory, Los Alamos National Laboratory, and the headquarters offices in Washington, DC. Then, in 1957, under a PHS sponsorship, Dade earned his doctor of philosophy degree in nuclear engineering from North Carolina State University. He began teaching radiation protection courses at the PHS Radiological Health Training Center in Cincinnati, Ohio.

In 1959, Dade joined the HPS. He became a certified health physicist (CHP) and a certified environmental engineer and, in 1961, at only 34 years old, he became the officer in charge at the new Northeastern Radiological Health Laboratory in Winchester, Massachusetts, where workers studied the fallout from weapons testing and monitored children's thyroids for the uptake of radioactive iodine. He retired from the PHS in 1966.

Dade then joined the Harvard University School of Public Health, where, for his tenure of 26 years, he served in several roles, including professor of engineering in environmental health, associate director of the Kresge Center for Environmental Health, chair of the Department of Environmental Health Sciences, and associate dean for the Center for Continuing Professional Education. Dade was loved by his students and was the perennial student choice for Harvard's "Golden Apple" award for teaching excellence. His textbook, Environmental Health, for which Dade published a fourth edition in June 2011, is the Harvard School of Public Health's preferred text for its course on the topic. Dade often referred to his appointment to Harvard as "calling", much like someone might feel when entering the clergy. That's not surprising; Dade was a highly spiritual man who taught Sunday school his entire life and found direction and inspiration in religious teachings, never to flaunt his beliefs or pass judgment on others.

Dade was very active in the HPS, becoming the New England Chapter president in 1966 and the Society's national president in 1971. Dade was the chair of the American Board of Health Physics for four years (1967-1970). He also served on and chaired many committees for the U.S. Nuclear Regulatory Commission (NRC), U.S. Environmental Protection Agency, National Council on Radiation Protection and Measurements (NCRP), International Commission on Radiological Protection, National Academy of Sciences, and American Academy of Environmental Engineers. Dade was a consultant to the World Health Organization for 15 years and, from 1988 to 1993, he was the founding chairman of the U.S. NRC's congressionally mandated Advisory Committee on Nuclear Waste.

In 1993, after Dade's retirement from Harvard, his son Matt cofounded the environmental consulting company proudly bearing his father's name, with headquarters in Richland, Washington. Today, that very successful company boasts 260 employees and more CHPs on staff than any entity other than the Department of Energy.

Throughout his life, Dade earned numerous awards and appointments, including the U.S. NRC Meritorious Achievement Award (1988), Distinguished Emeritus Member of the NCRP (1997), Georgia Tech Engineering Hall of Fame (1999), HPS Robley D. Evans Commemorative Medal (2003), American Academy of Health Physics William McAdams Outstanding Service Award (2005), HPS Distinguished Achievement Award (1982), and Harvard University School of Public Health Professor Emeritus Award of Merit (2006). He was a fellow of the HPS (1984), the American Public Health Association (1988), and the American Nuclear Society (1988). Dade served for over 30 years on the NCRP and became a distinguished emeritus member of the Council. Dade authored hundreds of journal articles, public presentations, and Health Physics News articles. Each one was "dripping" with his wit, humor, intellect, and unique insights.

Once, when I was one of his graduate students at Harvard, Dade told me something about himself that I try to live by. Paraphrasing, he said, "I might not be the smartest guy around, but I can out-work anyone." I don't believe the former at all, but he sure was right about the latter. I also witnessed, as a student in 1979, a phone call in his office from then U.S. President-elect Ronald Reagan's transition team trying to entice Dade with one of a number of high-level posts in the federal government and Dade replying, "Gee thanks, I'm very honored, but I really prefer being a college professor at Harvard." It was at that moment that I realized I had just won life's lottery by keeping Dade as my thesis advisor.

What Dade will be most remembered for is his humility, thoughtfulness, gentle nature, wit, generosity, and humor. Despite his multitude of awards and accomplishments, Dade remained genuinely humble and always the "country gentleman," able to explain complex technical issues with uncanny clarity and simplicity. Dade was a monumental leader in every sense of the word, a skilled mentor to so many of us, and an inspiration to the thousands of students, employees, and colleagues who knew him. He was one of those rarified gentle giants in our profession with a work ethic and moral compass for all of us to emulate.