Answer to Question #10299 Submitted to "Ask the Experts"

Before I bought my house I had it tested for radon. The results came back at an extremely high 2,800 becquerels per cubic meter (Bq m-3). However, at the time, I was reassured by the experts that this was inconsequential, that it could easily be mitigated.

The subfloor was depressurized with 7.6 centimeter (cm) polyvinyl chloride pipe that was exhausted out the garage roof. This brought the radon reading down below the US Environmental Protection Agency (EPA) limit of 4 picocuries per liter (pCi L-1 or 150 Bq m-3).* However, many times afterward when I ran a short-term test, it would be high. I was told that these short-term tests are deceiving. The only way you know your long-term annual exposure is with a long-term test so that you know your long-term chronic exposure.

A six-month test run in an unfinished basement during the winter months came back at 400 Bq m-3.

The mitigator ran a second 7.6 cm polyvinyl chloride pipe to the other side of the basement, joined it to the original, and put in a more powerful fan. This brought the six-month tests down to levels around 40 Bq m-3 and these levels have stayed low for 10 years.

I still have a question. Early on, the mitigator ran a continuous monitor for a few days which showed the radon spiking wildly.

I was told that these spikes are nothing to be concerned about, that it's just the long-term chronic exposure that causes lung cancer. I know that the US EPA website talks about getting the annual levels down. I also know that it's natural for radon to fluctuate due to the weather and other causes. But in the case of my house, the starting unmitigated level was tremendously high. If the fan is overpowered by a storm front or wind ripping into the house, my family could get blasted with a powerful but brief blast of radon. I don't understand how this could be inconsequential. I would think that even a brief exposure would be bad.

Should I be concerned about these fluctuations? Would a health physicist agree with what I've been told that it's just the chronic, long-term exposure that one should be worried about? As a health physicist, what would you do in a situation like mine? Would you let your kids play in the basement?

*The radon concentration units are given here in pCi L-1 (called traditional units) because that is the unit used by EPA. However, the Health Physics Society has adopted the SI (International System) of units and these are given in parentheses.

Congratulations for mitigating and monitoring the radon in your home. Your complex, excellent question requires a detailed answer. Let's start by distinguishing between radon concentration, radon exposure, and possible health risk.

Health risk: Energy delivered by radon-related radiation to sensitive lung cells enhances the chance of developing lung cancer. The majority of this energy is delivered by radon decay products (RDPs), not radon itself. It takes a few hours for these RDPs to build up in the lungs to their equilibrium value when the radon concentration increases but, in many circumstances, radon exposure is so closely correlated with RDP exposure that radon exposure is used as a "good estimate" for health risks. In fact most of the epidemiologic studies of radon and lung cancer use long-term radon exposure as the surrogate for RDP exposure. Because long-term average radon concentrations are easier to measure than RDP concentrations, protective recommendations are based on limiting your chronic exposure to elevated long-term radon concentrations. Keep in mind that individual factors can modify the health risk from radon exposure. Examples of risk-modifying factors include an individual's smoking history and even the fraction of time spent breathing through the mouth rather than the nose (mouth breathing may increase risk).

In homes where radon concentrations can vary in both space and time, accurate radon exposure estimates require long-term average radon measurements in the spaces where an individual spends a significant amount of time.

Large swings in radon concentrations have been reported in many unmitigated houses. In some cases hourly average swings follow a daily pattern. In other cases, the radon changes may be a response to some change in weather or house operation. In addition the average radon concentration can also be quite different from day to day and season to season. Thus, even if the radon detector accurately records the average concentration during its period of operation, a sequence of short-term measurements results from different periods can show a wide range of values. That's why radon measurements made to assess potential health risks should be taken over a long term (months or more) using detectors which respond and record rapidly enough to track all the temporal radon variations.

It is a little hard to be sure of the exact sequence or technical details of your radon measurements so I am assuming that:

The following answers address what I believe is your main question:

Do brief periods of high radon concentrations in your mitigated home pose a significant health risk even if the long-term average is low?

If the long-term average is measured by a detector like a CRM or an ATD that responds and records rapidly, then the long-term average will be a good estimate of the risk to someone occupying that space even if there are spikes. That is, the spikes will be adequately represented in the average. There is no known exposure-rate effect in the residential radon situation that would suggest that an exposure delivered in a short period of time ("spikes") is more or less harmful than that same exposure delivered over a longer period. My own experience (albeit limited) with radon fluctuations in mitigated houses is that a successful system controls erratic temporal behavior. Here's a graph of the daily average radon concentration in a home, before and after mitigation. Each line represents a six-month monitoring period from December to July. The lines for 2003–2004 and 2004–2005 represent the radon concentration prior to mitigation. The line for 2010 represents the radon concentration after mitigation. 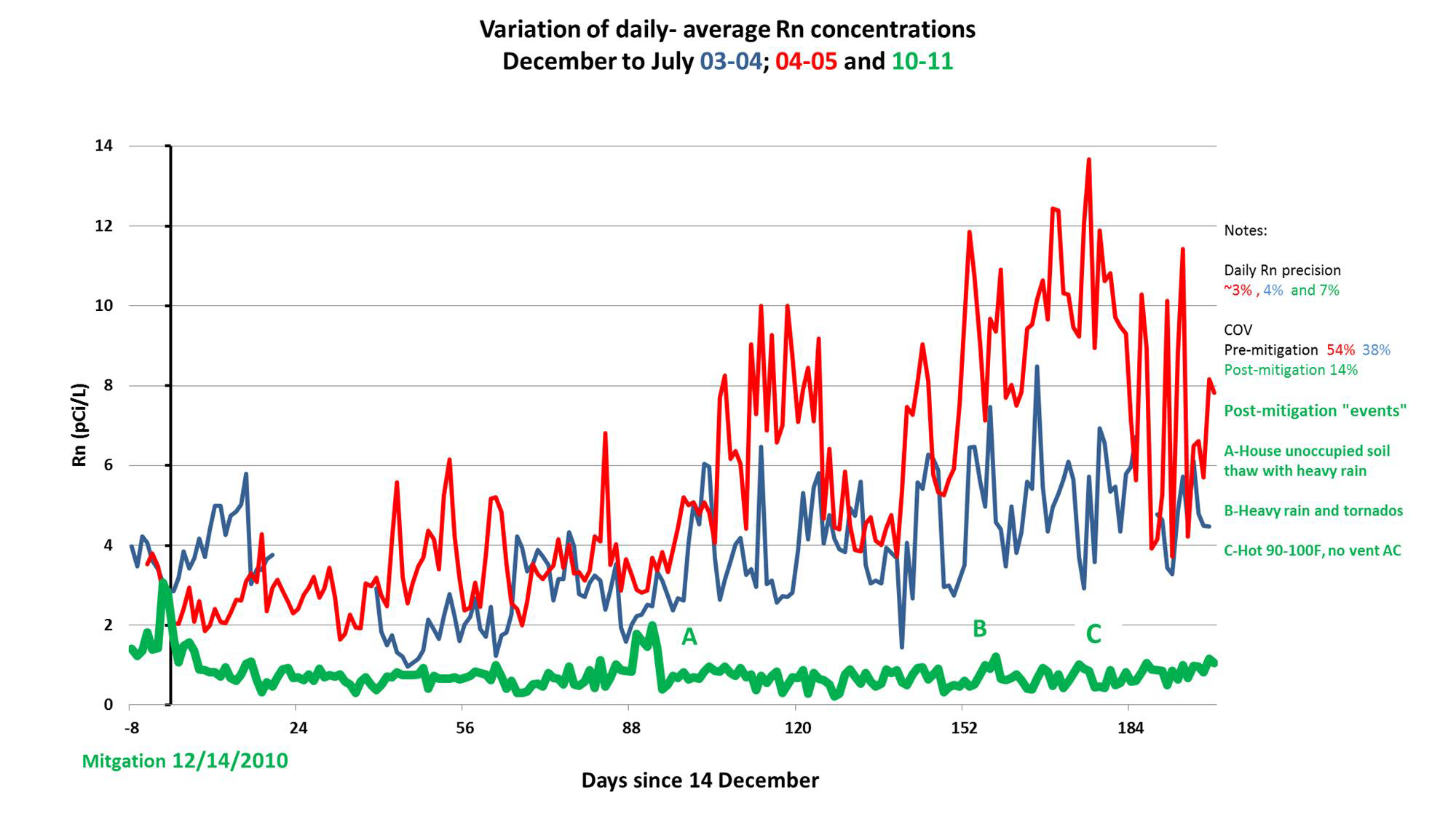 The radon fluctuated wildly in the two premitigation years shown but not in the year afterward. These daily averages were based on hourly readings (not shown) which showed even wilder variation than the daily averages. The postmitigation hourly average showed no large spikes during the six months of CRM monitoring including periods of severe weather changes (Steck 2012). You would need to make CRM measurements to know if spikes persist in your home. Assuming that your multiple long-term measurements were made with ATDs, the results suggest that you have lowered that space to levels near outdoor concentrations where the lifetime risk is low.

Recommendation: Consider doing a yearlong ATD measurement next year in case the radon in your house doesn't follow the usual seasonal pattern of higher radon in the winter than in the summer.

All of the ATDs widely available in the United States right now would meet the "responds and reports plus sensitivity" criteria needed to track spikes.

Ask the Experts is posting answers using only SI (the International System of Units) in accordance with international practice. To convert these to traditional units we have prepared a conversion table. You can also view a diagram to help put the radiation information presented in this question and answer in perspective. Explanations of radiation terms can be found here.
Answer posted on 20 September 2012. The information posted on this web page is intended as general reference information only. Specific facts and circumstances may affect the applicability of concepts, materials, and information described herein. The information provided is not a substitute for professional advice and should not be relied upon in the absence of such professional advice. To the best of our knowledge, answers are correct at the time they are posted. Be advised that over time, requirements could change, new data could be made available, and Internet links could change, affecting the correctness of the answers. Answers are the professional opinions of the expert responding to each question; they do not necessarily represent the position of the Health Physics Society.