Adapted with permission from NCRP 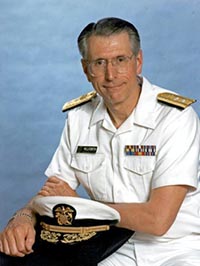 Rear Admiral John C. Villforth of Rockville, Maryland, passed away on 14 September 2019 at the age of 88. John was born in Reading, Pennsylvania, 28 December 1930 to Grace and Carl Villforth.

Before retiring from government service in 1981, John was Assistant Surgeon General and chief engineer of the US Public Health Service (PHS). He was also director of the US Food and Drug Administration's (FDA) Center for Devices and Radiological Health (CDRH) and was responsible for approving new medical technologies. After three decades of federal service, he became executive director of the Food Drug and Law Institute.

John began federal service in 1954 as a second lieutenant in the US Air Force (USAF), Medical Service Corps, and served as secretary of the USAF Radioisotopes Committee, and directed their radiological laboratory. He joined the PHS in 1961. During his service at PHS and FDA, he was the "point man" for emergency response activities during the Three Mile Island Nuclear Power Plant accident. Seven years later, he also provided technical advice and support to aid the Russian government during the Chernobyl nuclear accident.

John was a National Council on Radiation Protection and Measurements (NCRP) member from 1971 to 1982, was elected to NCRP Consociate membership in 1982, and played an important role in the 2013 "Where Are the Radiation Professionals (WARP) Workshop." He took great personal interest in the careers of others. As director during the formative years of the Bureau of Radiological Health (BRH), he heavily recruited young people from academia through fellowships and other programs and, in so doing, personally nurtured the public health careers of countless numbers of young commissioned officers and civilians. Past NCRP President John Boice was one of these young officers at BRH. By some estimates, BRH programs reduced the number of unnecessary medical x-ray procedures performed in the United States by at least one-third. Bureau-sponsored mentoring and foreign exchange programs for scientists around the world were initiated under John's leadership. As chief engineer of the PHS, he pioneered the Engineer Career Development Seminar Series.

John served on numerous boards relating to public health, including serving as president of the CDRH alumni association. The association enables CDRH employees and alumni to stay connected and to learn from each other about how best to serve the public health. The Conference of Radiation Control Program Directors established the John C. Villforth Lecture Series to honor his steadfast support of state radiation control agencies.

Photography was a lifelong passion for John. Friends and family always knew him to be on the other side of a camera. He was active in several local photography clubs.